Hat-trick of wins for McConnell 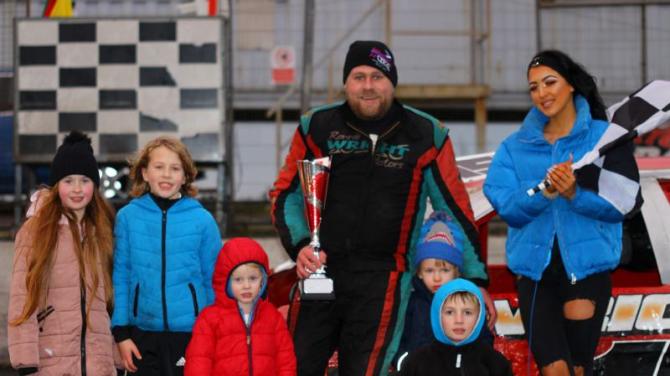 Derek was of course the much loved commentator at the Raceway for many years before he sadly passed away seven years ago.

The Brisca F2 Stock Car grid was swollen with the welcome addition of Billy and Adrian Finnegan as well as an appearance from Stock Rod Star Shea Duff.

B Finnegan set the early pace in heat one but was soon overcome by Craig McConnell the Irish Points Champion who romped clear to take the honours.

B Finnegan again showed strong pace in this one and looked as though he could go all the way to victory lane however McConnell for a second time made it to the front before the fall of the flag.

The title decider got off to a similar start with B Finnegan taking the lead, McConnell continued to make good progress through the field from the superstar grade with Sam McKay in tow.

At the half distance stage McConnell hit the front and went on to take the title and indeed his third win of the day.

Behind B Finnegan and Sam McKay enjoyed a good battle for the podium places.

The 2L Saloon Stock Cars also seen the return of some familiar faces, in the shape of Marcus Watt and Geoff Martin.

Watt was the early pace setter in heat one with Martin next up, on the move was the solo star grader Ryan Wright who was gaining ground quickly.

Wright swiftly made it to the head of the field and went on to take the win ahead of Martin and Watt.

Next up was the meeting final where Watt again enjoyed a spell out front before Wright toured through to claim the victory.

Watt was the gallant runner up with Martin completing the podium steps in third.

Local man Willaim Stewart proved unstoppable in the 1300 Stock Car class where he completed the afternoon undefeated with wins in the heat and feature race. Stewart’s closest chaser was Jason McCreight who posted a brace of runner up placing’s, others who featured well were Gareth Halliday and Fionn Donnelly.

Another driver on tip top form was young Sam Stewart in the Junior Rods. Stewart was in control of proceedings all afternoon, opening his win tally in the heat with a well-executed victory ahead of Ty Richardson. There was no stopping Stewart once again in the trophy race where he glided to glory ahead of Cole McFall and Jordan Nicholl.

Antrim’s Father and son duo Mark and J.P Kilpatrick enhanced the ORCi Stock Rod grid, when they joined the ranks to do battle for the Derek Mason King of the Corner Memorial event.

Mark made his presence felt right from the off when he landed the heat win ahead Thomas McCrory Jnr.

The trophy race played out in a similar fashion with M Kilpatrick holding on for the victory ahead of his father J.P in second and the World Champion Jack Kennedy third. A very welcome addition to the fixture was the all action Back to Basic Micro Bangers. There was a decent entry of fifteen cars with new and old drivers alike; among the more established names were Robbie Brown, Mazzy McCreight and Tommy McCrory.

The opening encounter was action all the way and Brown proved he hadn’t lost his banger racing touch when he picked up the flag. The final again was punishing to say the least, Brown looked as though he could do the double, however he got into some late drama which allowed Matthew McKinstry to sailed through and take the title, Brown recovered for second ahead of McCrory.

A spectacular Figure of 8 Caravan Destruction Derby concluded the afternoon’s racing. With a high number of competitors on track the large gathering of festive onlookers were treated to a mammoth crash fest. Michael McGarrity serviced the distance to take the victory.