McMillan on top of the World! 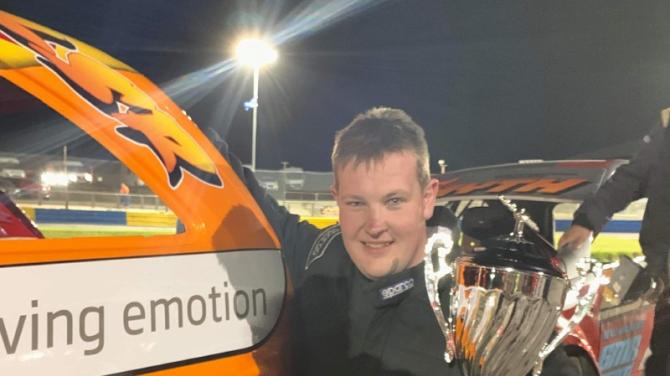 KELLS Stock Rod racer Derek McMillan continued his remarkable comeback season with victory in the Championship of the World at Lochgelly Raceway in Scotland at the weekend!

The local star sat out the whole of the 2018 racing season as he battled cancer, but he has come back more eager and focussed than ever in his quest for oval racing glory.

Back in June he raced to victory in the European Championship at his home track Aghadowey Oval, before following that up with a polished win in the British Championship at the prestigious Ipswich Speedweekend in England.

All attention then turned to the World Final, the biggest title on offer in the competitive Stock Rods division, and Derek spent many hours in the garage fine tuning his Vauxhall Corsa for the big event in Fife.

The top 36 drivers in the category qualified for the World Championship, with Derek taking victory in his opening heat having drawn near the front of the grid.

His second heat saw him starting near the rear of the line up, with a very accomplished drive seeing him come home in 10th place.

That qualified the 24-year-old star on the outside of the front row for the World Final, alongside English star and former World Champion Stuart Smyth from Middlesex.

Derek settled in behind Smyth at the green flag, tracking his rival’s every move during the opening exchanges of the big race.

Having weighed up Smyth for a number of laps, McMillan made his move down the back straight, slicing up the inside to hit the front.

From there Derek never looked back, taking the chequered flag at the end of the 40 lap showdown to become the 2019 World Champion, sparking wild celebrations amongst the huge band of travelling Ulster supporters.

“It’s a dream come true’ Derek told Guardian Sport, ‘Ever since I started racing at 12 years old I dreamed of being World Champion and I’ve done it! And to win the British and European titles too makes it a fantastic season.’

“I can’t thank my family, sponsors and helpers enough for what they put into my racing, and also everyone who travelled to Scotland to support me at the weekend.

“Whilst I was out of action the hope of getting back racing, and winning, was what kept me motivated, and I can’t thank all the staff at Antrim Area Hospital and the Cancer Centre at Belfast City Hospital enough for how they helped me in my recovery.’

It has been a fairytale season for the Kells driver, but he isn’t finished just yet!

“We have the Irish Championship coming up at Aghadowey in early October and my focus will now switch to that in the hope of finishing the season in style” said Derek.

Derek is sure of a hero’s welcome from a big crowd when he returns to local action at Aghadowey Oval on Saturday September 14th (6.30pm), a meeting which also features the elite National Hot Rods in a World Championship qualifier.