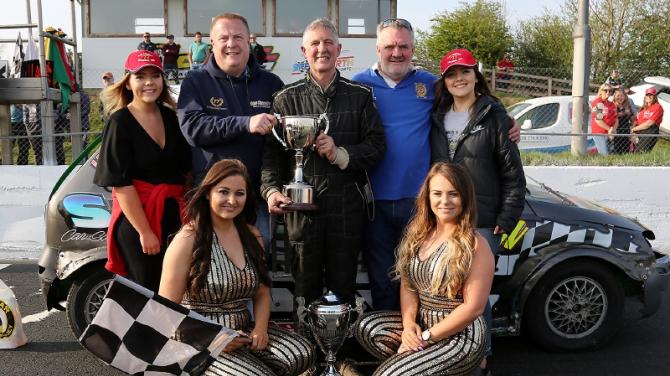 The Ballymena man began on the front row of the grid alongside Chris Lattka, from Scotland.

Prior to the race the stadium rose for a minutes applause in memory of former World Champion Connolly. Over the years McAfee and Lattka were career long sparring partners of three times World title winner Connolly.

The frantic opening exchanges saw McAfee ahead as Lattka got railroaded backwards, allowing Morrell to take up second ahead of McCready and D McMillan.

As the places battle intensified, McAfee was able to edge clear out front and come home to take the chequered flag and the coveted win.

Victor was visibly emotional as he emerged from his car to receive the superb Alan Connolly Memorial trophy in memory of his long time friend and rival.

Morrell and McCready completed the top three at the end of a simply sensational afternoon of Stock Rod racing, one which Alan himself would have been proud of.

Meanwhile, there was success for Kells driver Carl Sloan who won the 10th round of the Simpson Race Exhausts World Series NI for National Hot Rods.

The lower graders dominated the heats as the star men failed to make an impact.

McReynolds was on pole spot for the final, but he lost out to McQuaid early on before Sloan burst through to the front.

Carl had been a busy driver all afternoon as he also raced in the Stock Rods.

But he was able to pull clear to take an emphatic win in some style.

The other final winners at the Derek McMillan Commercial Refinishers sponsored event were Gordy McKee in the Lightning Rods and Joshua McMullan in the Thunder Rods.