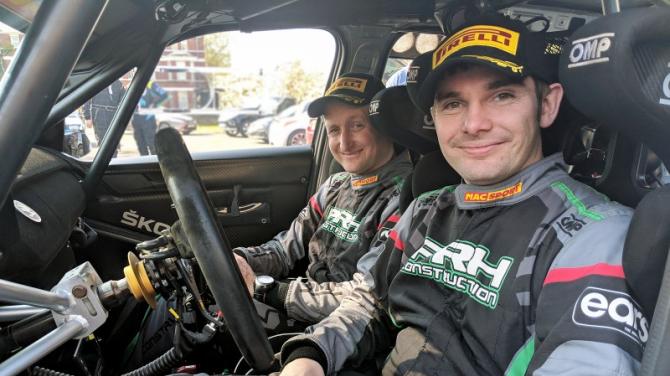 The Skoda Fabia R5 mounted crew grabbed the lead from the start and never looked back as they powered to a 14.1-second win over Callum Devine and Brian Hoy.

Henry, who opted to register for the 2019 Championship before the start of the event, secured maximum points in the series and plans to enter round four's Down Rally in July.

"We were trying a lot of different things with the car today," Henry revealed. "I wasn't happy with the car at the West Cork Rally so one of the reasons I came here was to see if we could do anything to improve the setup."

"We were having a bit of a problem with the car crashing out over the bumps and jumps," he explained. "Where these cars are designed, you don't get the same bumps that we have in this country but I think we've done a good job. We made a lot of changes to the suspension and it seems to be working very well now."

It wasn't a straightforward affair for the rally winners as a trip up a bank caused some panel damage to the front of their Skoda on stage two. They also lost their rear bumper but the damage was all cosmetic as they powered to the rally spoils.

Allen was using the event as a confidence builder after struggling to become accustomed to his previous car. He admitted the Hyundai was working much better for him and was battling for second overall.

However, it was Kevin Eves who sprung a massive surprise in his Toyota Corolla to take third overall as he pulled out all the stops on the final stage.

Eves was also 10 seconds quicker than Derek McGarrity who struggled with a bad tyre choice for the final loop of stages. McGarrity had eased himself into the event over the opening stages and admitted he was a bit rusty as he hadn't competed on closed roads since last July's Down Rally.

The result places McGarrity second overall in the championship standings while Derek and Mark McGeehan now comfortably head the tables.

The McGeehan father and son team had hoped to get a 20-second penalty quashed, which would have placed them third overall, but their hopes were dashed and they had to settle for sixth.

Sean Devine and Sean Ferris brought their Ford Fiesta home in seventh overall head of Alan Carmichael and Ivor Lamont who had a brief scare when a fuel pressure warning light illuminated.

Niall Devine and Liam McIntyre won the Group N category and were ninth overall with Camillus Bradley and Crawford Henderson completing the top 10 in their Escort. Next Event - The McGrady Insurance Motorsport UK Northern Ireland Stage Rally Championship now enjoys a three-month break ts underway in July. The Down Rally will be another closed road event, this time based in County Down. Details will be revealed over the coming weeks at www.nirallychampionship.com.