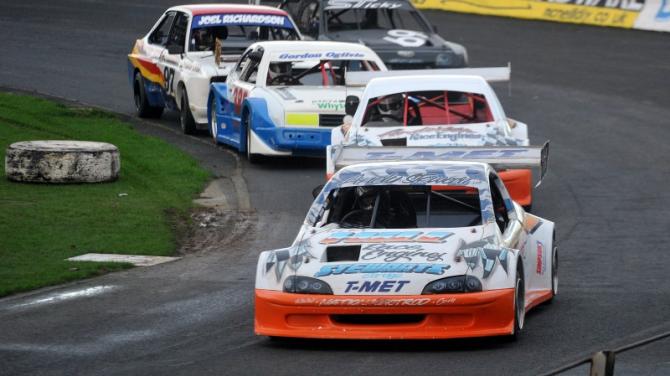 BALLYMENA Raceway welcomed in 2019 with a keenly contested programme of races on New Year’s Day, where the Winter National Trophies were the prizes on offer for the five classes on display.

The Hot Rods ran to an open specification and the grid included a mixture of National Hot Rods, a Classic Hot Rod and a 2-Litre Hot Rod.

Andrew Stewart steered his National specification car to victory in the opening heat before Clive Richardson produced a great run in his Classic Mk. 2 Escort to snatch the spoils in heat two.

The pair shared the front row for the final where Stewart quickly settled into the lead position and steadily increased his advantage to secure a dominant win in his Vauxhall Tigra.

Richardson gamely competed with the modern cars throughout the afternoon and was good value for second, with Scottish visitor Gordon Ogilvie a fine third on his first ever visit to Raceway.

The Stock Rod class produced a mixture of close racing and some hefty smashes, with each of their three events producing a different winner.

Heat one was marred by a big accident which unfortunately sidelined Alistair Christie and Steve Gooch for the remainder of the meeting.

Sam McKinstry eventually scampered to success in this one before current form man Jason Clyde coasted to victory in heat two, which secured the Ballymena man pole position for the final. McKinstry muscled his way in front during the opening lap however as Clyde lost out in the early skirmishes and dropped to fifth.

The one to watch in this one however was Shea Duff. The Crumlin teenager charged through from the third row of the grid to take it up on lap five and kept the opposition at arms length until the finish for an eye catching victory.

Kurtis Reid chased hard, but had to settle for second spot, while Clyde recovered some ground to salvage third at the flag.

The Group Two Lightning Rods fielded the largest grid of the afternoon with fifteen cars on track.

Clive Wilson was first across the finish line in the opening heat, but received a two place penalty from the race steward for a misdemeanour during the race, which handed the victory to Irish Champion Paul Nesbitt.

New recruits Lee Topping and Dylan Magee battled hard over the front spot in heat two and it was Magee who eventually registered his maiden victory in the GP2 class after a great run, with Topping in second and David Gillespie in third.

Those results earned Magee pole position for the final, but the newcomer was quickly under attack from the experienced duo of Nesbitt and Wilson.

On lap two Wilson squeezed ahead in his Vauxhall Astra and once out front displayed his pace once more to reel off a splendid win.

Magee was not out of place in this company however and held his own until the chequered flag to maintain a most encouraging second place, with Irish Champion Nesbitt in third.

Street Rods and Junior Rods completed the classes on display at the McCarroll Plant Hire sponsored meeting. Ballymoney teenager Mark Brogan took the Street Rod class by storm with an untroubled hat-trick of wins in his Citroen Saxo!

In the Junior Rod ranks Jason McMullan squeezed home just ahead of Jack Morrow in the opening heat.

Morrow would not be denied in heat two however and then went on to record his second win of the afternoon in the final, where Jonathan Brown and Josh Gooch filled the podium positions.

New Season - The new season will commence in earnest over the Easter weekend with the traditional curtain raiser, the Yokohama Championship for the Stock Rods, on Good Friday (April 19).