Craigywarren teen Adam is a chip off the old block! 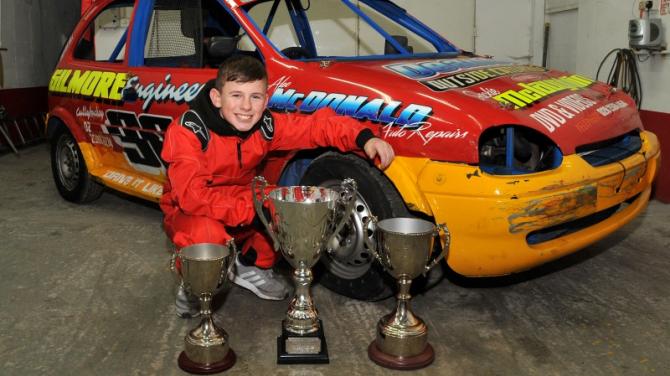 Fourteen year old Adam started the race on the outside of the front row, having finished second in the season long NI Points Championship.

With so many competitors eager to claim the green roof of Irish Champion it was a toughly fought contest early on, with Adam dropping down the order having been stuck on the slippery outside line in the wet conditions.

Many a driver would have faltered, but Adam is made of stern stuff and staged a remarkable comeback through the field to second place.

That was where he finished the race, but he was crowned Irish Champion when the first man over the line, Lurgan's Graham Meek, was docked two positions by the Race Stewards for contact on another car early in the race whilst taking the lead.

Adam's father Micky is a well known name on the local racing scene, having four times been an Irish Champion as well as winning two National Championship titles in the Stock Rods division.

Micky is always seen in the pits making sure Adam's Vauxhall Corsa is in tip top condition for each and every meeting.

It rounded off an excellent season on the DMC Race Promotions oval circuits of Aghadowey and Tullyroan for the Slemish College pupil, as Adam also took victory in the first ever Irish Open Championship back in August against some strong Scottish opposition.

The Junior Productions formula has recently been introduced to Lochgelly Raceway, and Adam has already made a trip across the Irish Sea to sample the Fife venue.

Adam thanked his Dad and the rest of the family for all their help during his successful season, as well as all the sponsors who make his racing possible.