Jas is ace at Raceway finale! 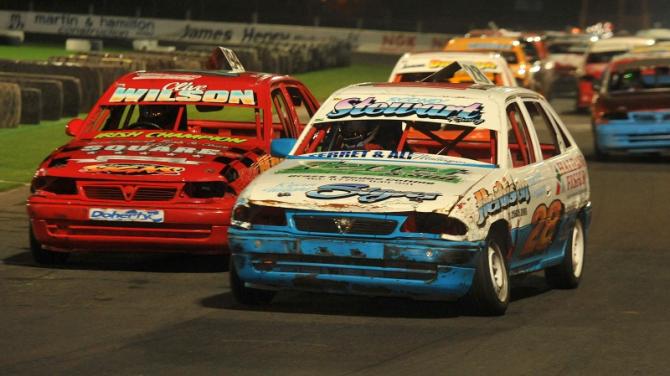 STOCK Rod racer Jason Clyde was in tip top form at the final Ballymena Raceway meeting of the season on Friday evening!

The Ballymena based racer began the evening in second position in the Teng Tools Series and there was drama before racing even began when series leader Steve Gooch was sidelined with a blown gearbox in practice.

Clyde took full advantage of the opportunity which now presented itself and posted a clear victory in the opening heat.

A second place finish behind Aaron Moody in the following heat was enough to earn Clyde pole position for the series final, with Moody alongside on the front row.

It was Clyde who made the break at the green flag while Moody dropped back to fifth in the opening stages behind Clyde, Jack Kennedy, Sam McKinstry and Irish Champion Ashley Graham.

Clyde set about building up a useful advantage as Moody climbed his way back towards the front and the race leader confidently kept his rivals at a safe distance to claim the overall victory and a £500 voucher from series sponsor Teng Tools.

Kennedy chased hard, but had to settle for second with Moody back up to third by the flag.

Joshua McMullan continued his strong end to the season with a clinical victory in the Golden Helmet Trophy for the Group Two Lightning Rods. Two qualifying heats determined the grid positions for the Golden Helmet event and the first of these brought a win for Irish Champion Paul Nesbitt, with Broughshane’s Freddie Fleck a very close second.

Defending Champion Clive Wilson posted a non finish in the first qualifier, but got his challenge back on track with a smart win in heat two, with McMullan in second and Cullybackey’s Rodney Stewart in third.

When the points were tallied it was McMullan and Nesbitt who qualified on the front row of the grid for the final where pole sitter McMullan darted into an early lead.

Nesbitt meanwhile slipped behind Fleck in the early stages and their subsequent battle allowed McMullan an opportunity to build up a healthy cushion.

The two way battle for second soon became a three way scrap as Wilson reeled in the pair, while out front McMullan enjoyed a comfortable run to the flag and added the Golden Helmet Trophy to his victory in the World Cup race the previous week.

Wilson slipped ahead of Nesbitt and Fleck in the closing stages to snatch second at the flag, with the top six rounded out by Nesbitt, Fleck, Mark Goldie and George Esler.

Mark Heatrick borrowed a car from his nephew Adam Heatrick to compete in Friday night’s meeting and promptly won the final in Round 6 of the Simpson Race Exhausts World Series NI!

Mark’s regular car was badly damaged in a big crash during the recent British Championship event, but the County Armagh based racer looked right at home in his new mount.

The local racers were joined on the grid by English visitor Danny Hunn, but it was Podge McQuaid who caught the eye in the qualifying heats with a very tidy brace of victories which earned him pole position for the 30 lap final.

Fellow front row starter Heatrick made a lightning break at the green flag to take it up however, while McQuaid was soon under pressure from the pack.

Broughshane’s Jaimie McCurdy relegated McQuaid soon afterwards, but Heatrick would not be caught out front and drove a commanding race to lead every lap of the final.

Warren Thompson is the Street Rod Irish Champion for 2018! Norman Mitchell qualified on pole position and led the early laps of the race while Thompson worked his way onto the leader’s back bumper.

The pair then fought out a very close battle for a number of laps, which also involved Shannon Morrow for a time. Mitchell defended his position resolutely, but Thompson eventually found a way through and once clear of his rival steadily pulled away for a comprehensive win. Ben Carvill made great strides in the later stages to motor home in second place, with Mitchell in third, followed by Morrow, Ashleigh Mark and James Taylor.

The support race brought a first ever Raceway victory for Mark, who showed the rest a clean pair of heels in her Ford Fiesta.