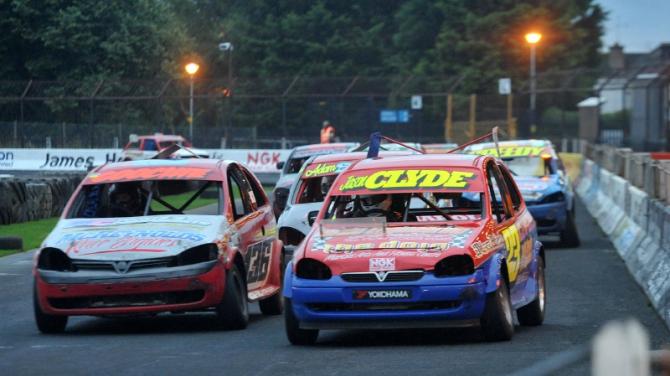 CRAIG McConnell returned to his Bangor base with the Moffett Shield on Friday evening when the F2 Stock Cars made their first appearance at Ballymena Raceway since April.

It was Sam McKay who started proceedings with a victory in the opening heat however, the Ballyclare racer revelling in the damp conditions to finish well clear of McConnell and Gavin Fegan.

The track had dried out slightly by heat two and McConnell proved the man to beat this time, powering home ahead of Irish Open Champion Fegan and heat one winner McKay.

Ted Holland and George Campbell both enjoyed stints out front in the final, but McConnell was on the move again and nipped ahead on lap five.

Fegan gave valiant chase, but could not get on terms with the leader as McConnell stroked it home for his second win of the evening to claim the Moffett Shield.

Fegan finished in second, with McKay in third, while Campbell picked up the award for the best white or yellow roof finisher.

Steve Gooch is the early leader of the Teng Tools Series for the Stock Rods after a heat and final double success in Friday’s opening roun.

Gooch’s evening got off to a poor start in heat one where an incident with Liam Irwin earned him a two place penalty.

Matthew Milliken led this one until the halfway point before the high speed train of Niall McFerran, Stephen McCready and Aaron Moody powered ahead.

There was little to separate the trio, but Irish Open Champion McFerran kept his cool to lead home World Champion McCready and Moody.

Further penalties were handed out in heat two where on the road winner Jason Clyde was demoted to third by the steward.

This handed a first win of the night to Gooch, with McCready in second spot.

The results from the heat races determined the starting positions within each grade for the final and it was blue graders Gooch and Clyde who quickly settled into the front running positions.

There was nothing to separate the pair throughout, but Gooch managed to keep his nose ahead to grab his second win of the night.

Clyde showed good pace in his new car and was a strong runner-up, with McCready back in third.

Jason Darragh was crowned the winner of the Muppet Motorsport Grand Prix Series after a keenly contested final at Raceway.

Darragh qualified on pole position for the series showdown with Richard Purdy alongside on the front row, and the pair ran first and second during the opening exchanges, with Newtownabbey’s Paul Nesbitt and Broughshane’s Freddie Fleck next in line.

Purdy was the first to attempt an attack on the leader, but fell back to fifth as Darragh confidently defended his position.

The pressure was mounting on the leader however with the first five cars now nose to tail!

Nesbitt was next to try his luck and managed to draw alongside the leader at one stage before a determined Darragh teased out a slight gap once again.

Darragh continued to hold a neat and tidy inside line as Fleck now positioned himself for a challenge. Darragh was not going to be denied at this late stage however and the Rasharkin racer completed a superb defensive display to take the chequered flag and claim the GP Series title. Fleck was a close second, with George Esler in third. The earlier heat races had brought victories for Rodney Stewart and Joshua McMullan.

Matthew Drysdale earned the right to carry the gold roof on his Junior Rod after a hard fought victory in the final of the Wash’N’Dash Gold Roof Series.

Two further qualifying heats preceded the Series final and both proved fraught, with a number of incidents. Newcomer Odhrann McGeown marked his first appearance at Raceway with a well taken victory in the opening heat ahead of Matthew Drysdale and Ballymena’s Cole McFall.

McGeown showed well once again in heat two, but this time Jack Morrow nipped ahead at the half way point and breezed home for an eye catching win in his Vauxhall Corsa ahead of McGeown and Jonathan Brown.

Drysdale and McFall shared the front row of the grid for the Gold Roof final, with Morrow and Declan Og McFerran on row two.

Drysdale eased ahead at the green flag as Morrow squeezed into second ahead of McFall and this trio quickly began to pull away from the main pack.

Morrow tried the outside line unsuccessfully which allowed McFall to slip through into second, with Drysdale setting the pace out front.

As the laps ticked down McFall went on a charge and closed the gap on the leader, but Drysdale have everything well under control and confidently reeled off the remaining laps to secure the Gold Roof title. McFall was good value for second, with Ty Richardson from Randalstown in third after a strong end to the race.