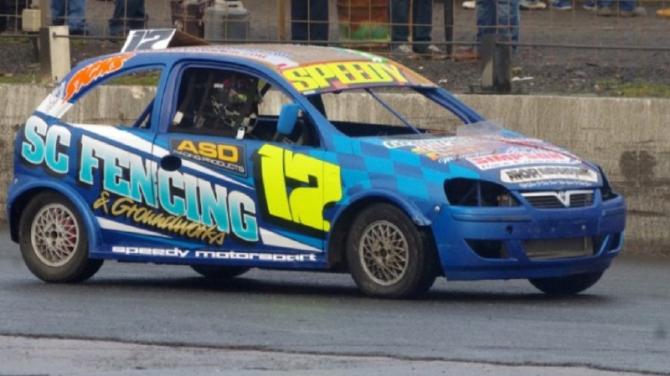 STOCK Rod World Champion Stephen ‘Speedy’ McCready continued his success-laden 2018 campaign at the weekend with victory in the British Championship!

The Antrim Ace travelled over to the tricky Barford Raceway in County Durham on Sunday and led home Scottish stars Leon Stewart and Cameron Doak to add the British title to his Yokohama and National Championship successes.

This weekend McCready will look to continue his winning ways on Saturday evening when Ballymena Raceway hosts the UK Championship (6:30pm start).

There is plenty of opposition in this competitive class however, such as European Champion Raymond Harper from Dundrod.

Irish Open Champion Niall McFerran currently tops the Points Chart and will be another strong contender along with Irish Masters winner Wilfie McNiece.

Steve Gooch enjoyed a couple of race wins at the previous Raceway meeting and will hope to challenge again. Other frontrunners are likely to include Adam Sloan, Aaron Moody, Jason Clyde, Shea Duff, Kurtis Reid, Alastair Bolton and Jack Kennedy.

Two qualifying heats will determine the starting positions for the UK final.

Over 70 entrants have been received for the show and a varied line-up of top class machinery will be on display from 5pm onwards.

Carl Sloan from Kells registered a race win in one of the qualifying heats and will be another to watch out for, along with Shane Murray, Derek Martin and Jaimie McCurdy.

The final winner will receive the Anderson Racing Engines Trophy which is currently held by John Christie.

Points Champion George Esler and Irish Champion David Reynolds are likely to feature prominently, along with the Nesbitt brothers, Paul and David.

Cullybackey’s Ricky Purdy will hope to be in the mix too, along with Clive Wilson, Jason Darragh, Freddie Fleck and Andy McLeister.

Irish Champion Taylor Broggy and Points Champion Norman Mitchell are expected to provide a sterner test for Thompson this weekend.

* The action commences at 6:30pm on Saturday.

Spectators are reminded that the meeting originally scheduled for Friday evening (August 10) has been cancelled.