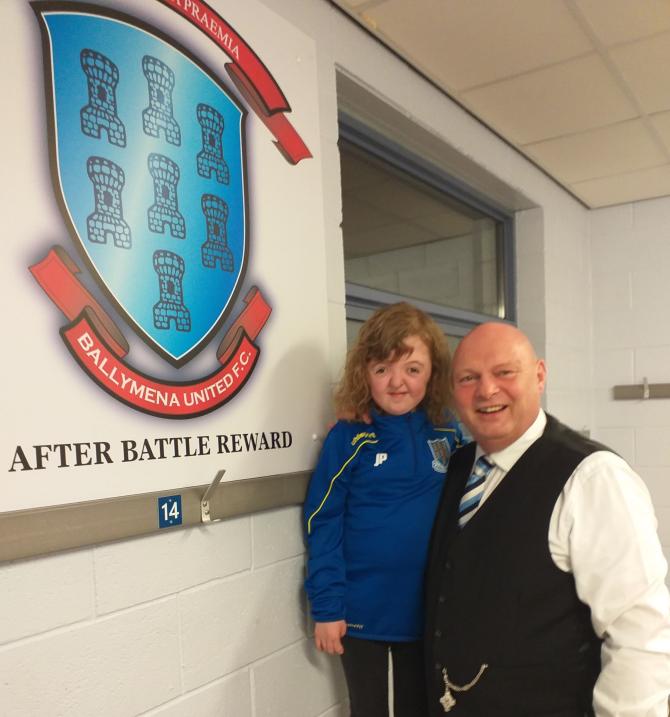 JESSICA Philpott holds another fund raiser for Great Ormond Street Hospital (GOSH) on Wednesday night at Castle Tower School (6.30pm).
The 10-year-old Moorfields Primary School pupil will have a stall selling sweets at the Christmas Party and Market.
The Ballymena girl recently presented a £1,500 cheque to GOSH. She is actually a registered GOSH fund raiser, the only one on Northern Ireland.
At the weekend Jessica fulfilled a long time ambition - to meet Ballymena United manager David Jeffrey!
Jessica attended the annual United Carol Service at the Showgrounds and was then invited, along with her parents Julie and Lawrie, by David to his office for a chat, followed by a tour of the complex.
David said he was absolutely delighted to have met Jessica.
“If anyone was to consider that in the last number of years Jessica underwent 70 operations, ...anyone to go through that amount of surgery it is absolutely ridiculous. She has a massive big operation coming up,” outlined David.
“And when you think about people in that situation who would maybe seek pity and look for favour, and look for a by-ball; but she does it the opposite way. She actually is a giver. She is an encourager and she goes out and does for others. She has already raised £1,500 for the Craniofacial Unit in Great Ormond Street where she will have her surgery. It is absolutely superb,” said David.
“If anyone was an encourager, not just to me but to Bryan (McLoughlin) it was Jessica. She joined us in the Carol Service and that was absolutely lovely also.”
Speaking exclusively to Guardian Sport on Saturday after the Carol Service, David said that to finish the day spending time with Jessica Philpott “was something, and I usually have a decent vocabulary, but I really do not have the words to say how privileged, how grateful, how thankful and how encouraged we are to have Jessica as my and our encourager. And it was brilliant to have her here.”
David said he encourages people to attend the Christmas Party and Market at Castle Tower on Wednesday night.
“Make sure you give Jessica’s stall a visit,” said David.
“And believe they will get more from Jessica than they will give. She is a giver. She is a darling young lady. I cannot overuse the word privilege to have time with her.”
Jessica’s dad Lawrie said it was a privilege to have met David, and thanked him for taking the time to have done so.
“David is Jessica’s idol and she has been by herself over the last year wanting to meet him. For us we are very privileged as a family to have been given this opportunity. Jessica was a little bit overwhelmed but at the same time she really enjoyed the occasion,” said Lawrie.
* At Moorfields Primary School’s recent Carol Service Jessica gave a talk about the work of Great Ormond Street Hospital.
The school has taken on GOSH at their chosen charity.
Meanwhile, Jessica will be mascot at one of the Ballymena United matches in the New Year.
And the club plan a collection that day at the game for Great Ormond Street Hospital

Jane Witherspoon spoke to Jessica’s mum about the challenges she faces in the New Year.

Local girl Jessica Philpott has become known around the town for her excellent fundraising efforts, all in aid of Great Ormond Street Hospital.
But now as she looks forward to Christmas her mother has spoken exclusively to the Guardian about the challenges that are ahead for Jessica in 2020.
Jessica’s journey over the last ten years has been infinitely more challenging than most ten year olds can possibly imagine.
She has become known as one of the most operated on patients in the UK, after undergoing more than 30 procedures by the time she was just six years old.
Born with 'Apert Syndrome', a condition that falls under a rare craniofacial umbrella that few people truly understand, Jessica has already faced many challenges.
The syndrome affects just 1 in every 100,000 live births and causes premature fusions of the bones in the skull, feet and hands and so Jessica has faced over 70 operations in Great Ormond Street Hospital in London over the last ten years.
Jessica's mum, Julie told the Guardian: “We know Jessica is a gift. Her name actually means 'Gracious Gift’, so in many ways she wouldn’t be who she is without Apert Syndrome, but it does come with many challenges for all of us, not least Jessica.”
The Moorfields Primary School Pupil had her first surgery at only four months old when she had to have her skull expanded as she had developed pressure on her brain.
She then underwent a further skull expansion when she was just 18 months old.
Julie continued: “Jessica has had numerous surgeries to correct the fusion in her hands and to create functional fingers, and numerous surgeries on her feet and ankles to try to correct bone fusion, though the surgery on her feet has been the least successful.
“She also had the added complication of being born with a cleft palate and has had surgery to repair this in recent years.”
Issues regarding Jessica's sense of hearing and vision have also arisen, however her spirit and sense of humour has never been dampened.
“The one thing that Jessica does have full ability to do is smile! She smiles through all of her challenges and accepts them with grace and dignity. Her zest for life would put many of us to shame.”
Jessica's next surgery will be her mid face advancement surgery in May 2020. Julie confessed this is one the family have been particularly dreading.
“It’s a risky, complicated and a long process. Essentially, Jessica will have a distraction device called a Red Frame that looks like fancy headgear with pins inserted at various points on her facial bones, and these pins will be turned every day.
“From beginning to end this process can take three months.”
2020 will undoubtedly be a hard year for the whole Philpott family and unsurprisingly it's going to be one that they may not be looking forward to.
Julie explained: “We embark on this part of our journey with very mixed emotions.
“We are excited for Jessica, as it’s been her choice to proceed with this operation, but we also have a sense of dread as we face the reality that Jessica’s face will never look the same again.
“A face, in some ways, reflects who we are. It reflects that reality of identity, and when it changes, we look at our children, knowing that they are the same inside, yet missing the features that we have come to know and love.”
Jessica has a great affection for Great Ormond Street Hospital, in fact it is very much her second home, having spent much time there during her short life already.
Julie explained why it was important to Jessica to raise money for the hospital. “Anyone who knows Jessica will know that one of her many qualities is that she always thinks of others, and so a few months ago she came up with the idea of raising money for the Craniofacial Unit in Great Ormond Street where she will have her surgery.
“She decided that she could go around craft fairs selling sweets and so that’s what we have been doing over the last two months.
“Jessica is now an official GOSH Funder and I would like to take this opportunity to thank Niall from Teamkit on Broughshane Street who sponsored her fundraising clothing!
“We have been overwhelmed by the generosity of the people at these fairs and to date Jessica has raised an amazing £1500.
“The money raised will be used by the unit to fund things like play specialists and parent and carer facilities, these things make life a little bit easier for families who have to spend long periods away from home and in hospital.”
Jessica is a big football fan, and although playing football can present challenges she always likes to give it a go. Her dream has been to meet David Jeffery, and this came true for her at the weekend.
Julie said: “Ballymena United holds a special place in Jessica's heart as her late grandfather, and best friend, Norman Emery was a lifelong supporter. If Ballymena United were playing at the showgrounds then so was her Granda!
“On Saturday evening, Jessica’s dream became a reality as David invited us along to the Carol Service and took the time to chat with us.
“All at Ballymena United went out of their way to welcome us and we would just like to say a big thanks to all who helped make this dream a reality - you know who you are!
“We would also like to take this opportunity to thank everyone who has donated to Great Ormond Street Hospital, your generosity has been overwhelming!”

Countdown on for Mark Lynn footie