Listen up folks! Midtown Sounds is coming to Ballymena 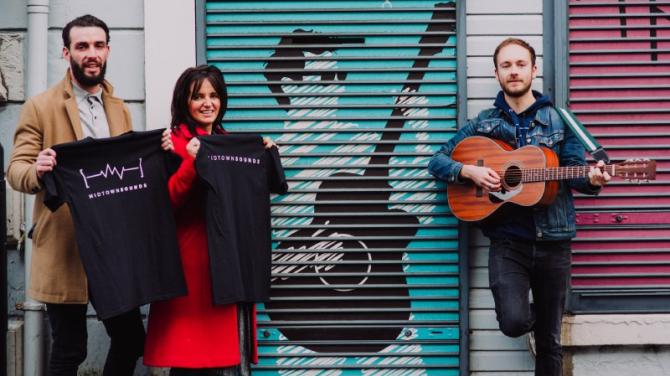 BALLYMENA is the town that keeps on giving with the announcement that the first ever music event, Midtown Sounds, is being held in the town centre on Saturday, February 24.

Midtown Sounds, organised by the Ballymena BID and in association with Mid and East Antrim Borough Council, will celebrate the best musical talent in Northern Ireland with a range of live performances planned at various shops and eateries throughout the town. Confirmed acts include singer/songwriter Brash Issac, Runabay and Sarah Crockett with many more yet to be announced.

Following the success of the Ballymena Means Fashion event, the Summer Carnival and Discount Day, Ballymena is proving the town really has something for everyone. Visitors have come from all over Ireland and as far away as Scotland for the town’s events and the event organisers believe Midtown Sounds will have the same appeal.

Ballymena BID manager, Alison Moore said: “We are very excited about the launch of Midtown Sounds in Ballymena.

“Alongside Mid and East Antrim Borough Council, we have secured performances from some of the best musicians locally and from across the province, and we’re delighted that they have agreed to showcase their talent.

“We want people to enjoy their experience in the town centre and with the wide range of retailers and the beautiful eateries and bars already available, the addition of live entertainment will be an added bonus. Musicians will be placed in over 20 shops and eateries throughout the town centre from 12pm – 3pm on Saturday, Feburary 24 and we have ensured, where possible, that the music in each venue reflects the ambience of the store.

“We have had great feedback from the traders in the town, as well as the visitors to the town following our previous events and we want to ensure people get more than they expect when they visit Ballymena.

“There is so much to offer, not just from our traders but also the standard of performers in the area; Midtown Sounds is the perfect platform for them to showcase their amazing talents.”

Midtown Sounds will officially launch on Friday , February 23 from 7pm in Follow Coffee Co with a preview of some of the fantastic talent performing at the music event.

Joe Rocks, Arts Administrator from Mid and East Antrim Borough Council, said: “Midtown Sounds is shaping up to be an excellent event!

“We have rounded up some of the best up-and-coming artists in Northern Ireland today who will be performing in Ballymena on February 24.

“Working in partnership with the BID has strengthened the appeal of the event and we are very pleased that so many of the towns traders are involved as ultimately, they are what brings the visitors to Ballymena.”

Joe, a musician himself, has always been heavily involved with the local music scene, even prior to establishing his own record shop and record label, Track Records.

Having organised a few music nights at various venues across Ballymena, he helped to set up The Sitting Room Sessions alongside a host of other local artists.

Joe plans to build on his work with Track Records through his new role with the council. The first step in this process comes in the form of Midtown Sounds, a collaboration between local businesses, local artists, Council and the BID. The project has been supported by The Executive Office through Mid and East Antrim Borough Council’s Good Relations Programme.