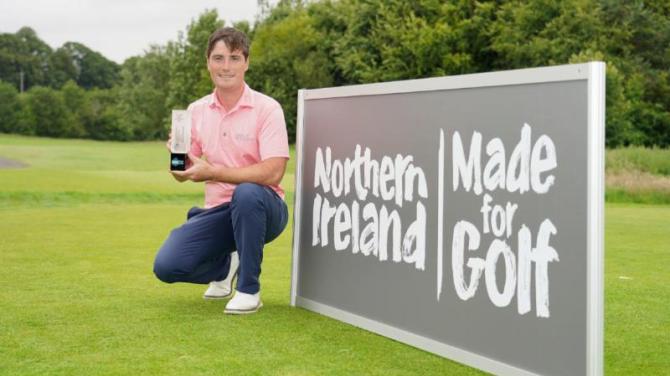 The Ballymena man was in imperious form all week in the Clutch Pro Tour event played in a new pro-am style format this year and contested over three venues (Cairndhu, Castlerock and Galgorm).

In the final round at Galgorm, McElroy was one of only two players to break par as he moved away from the field. Although he dropped a shot at the par four 16th, early birdies came at the third and seventh as he signed for a one-under 69 to add to his two 68s at Cairndhu and Castlerock for an eight-under winning aggregate (205).

Tim Rice was the only other player to go under par as the Limerick professional also signed for a one-under 69. Rice raced out of the blocks with birdies at the first and second with further birdies at the seventh and eighth but dropped shots came at the fifth and ninth.

On a day when no one could keep pace with McElroy, Rice’s runner-up finish on one-under 212 was good enough to secure the second male invite into the World Invitational to be played at Galgorm and Massereene from August 10-14, 2022.

Forrest Little amateur Jack McDonnell (73) secured third on level par, one ahead of Gary King (73) in fourth, while The K-Club’s Conor O’Rourke (74) and Jack Yule (72) tied fifth on two over.

Billie-Jo Smith was the leading female golfer and she too booked her place at the World Invitational, a tri-sanctioned event between the DP World Tour, LPGA and Ladies European Tour.

The former England soccer international closed with a round of 72 to add to her two 74s at Cairndhu and Castlerock over the opening two days for a seven-over 220 total.

In the Pro-am team event there was another local winner when Whitehead professional JR Galbraith teamed up with Charlie Henderson to win on 26-under 189. The leading pair finished six strokes ahead of Jamie Dick and Jonathan McKnight and Kerry Mountcastle and Irish International cricketer Kyle McCallan in a tie for second.

Speaking after this win McElroy outlined his main goal was to qualify for the World Invitational - “To get the win was fantastic. It was great to win here at Galgorm, a venue I know so well. This is first time this year I’ve been able to compete in front of family and friends,” he said.

“There was no real secret to my win. I just grinded it out when I had to. I’ve hit a bit of good form recently. My driving wasn’t great this week but I managed to play smart golf and grind it out..”

McElroy competes in the EuroPro which starts this Wednesday, and then takes part in a couple of Challenge Tour events, before the World Invitational in August.