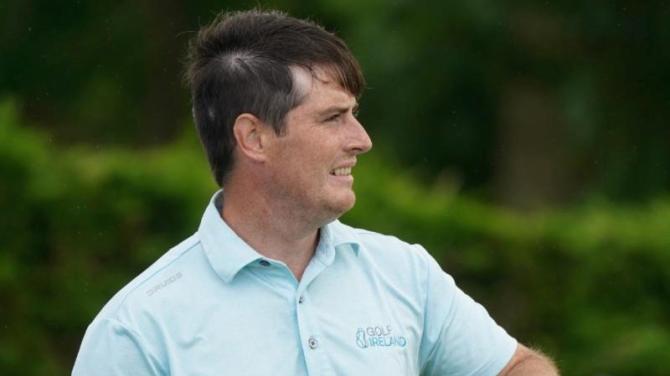 DERMOT McElroy will take a commanding four shot lead into the final round of the Northern Ireland Open presented by Modest! Golf to be played at Galgorm.

The new Pro-am format where professionals compete alongside amateurs, that includes local celebrities, is played over three courses and has been a real success with those competing in the Clutch Pro Tour event.

After two rounds at Cairndhu Golf Club and Castlerock Golf Club, the final day action will take place at Galgorm, where local favourite McElroy will hope to get the job done in front of home fans.

The 29-year-old carded a second consecutive 68 to lead on seven-under 138, four ahead of Irish amateur Jack O’Donnell in second after his 71 at Castlerock.

McElroy managed six birdies and just the one dropped shot at the par four sixth in his round at the north coast venue.

Gary King and The K-Club’s Conor O’Rourke are still within striking distance on two under after both carded 71s at Castlerock today.

Joint first round leader with McElroy, Jake McGoldrick (74), is tied fifth on one-under alongside Rob Harris (71).

The top 60 players and ties advance to today’s final round at Galgorm.

In the Pro-am competition Irish international cricketer Kyle McCallan leads alongside New Zealand professional Kerry Mountcastle on 16-under after today’s 64.

They lead by one from Jamie Dick and Jonathan McKnight with a chasing pack on 14-under that includes, Bryan Magee and Darren McHale, Mitchell Bynert and Tony Watts plus JR Galbraith and Charlie Henderson.

The cut for the team event fell at 11-under with a couple of pairings missing out on the top 12 teams who advance to Galgorm for the final round.