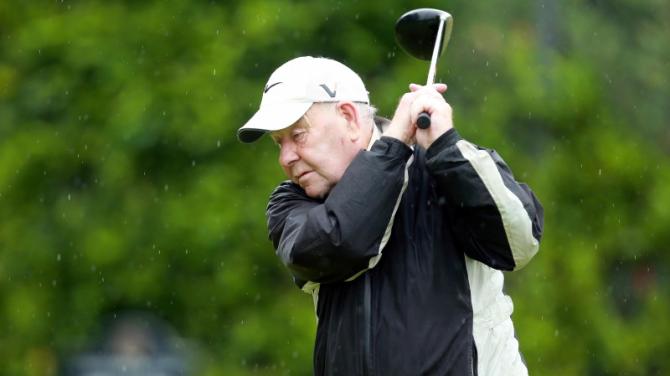 The 81-year-old Ballymena man takes part in the ISPS Handa Open tournament at Galgorm Castle Golf Club - and will do all he can he take the coveted crown on his own doorstep.

Drew, a regular competitor in the Open, managed runner-up spot when it was hosted in Hamilton, Scotland, a few years ago.

And he would be delighted with same again - or even better - when he takes to the course today (Tuesday) and tomorrow in the 36-hole Stableford.

“I will certainly be giving it my all,” he told Guardian Sport. “I cannot wait to get started.”

On Friday past Drew, and his guide Warren Stewart, enjoyed a round as the former familiarised himself with the prestigious course, which along with neighbouring Massereene GC, played host a couple of weeks ago to the ISPS World Ladies and Men’s Individuals.

A fine finish in the Open would put the icing on the cake for Drew, who earlier in the year was awarded a BEM in the Queen’s Birthday Honours List.

He said it is a pleasure and honour for Northern Ireland, and Mid and East Antrim Council, to he hosting the British Blind Open.

“Northern Ireland Blind Golf Association is one of the world’s oldest blind golf associations and this year celebrates its 30th anniversary,” outlined Drew.

“This week we are embracing the opportunity to create a festival of blind golf and blind sport with our partners, Mid and East Antrim Council, DSNI, VSI and R&A in and around my home town of Ballymena.”

Meanwhile, with Covid regulations still in operation there will be a reduced field this week - but Drew is quick to point out that although quantity is reduced quality is not.

“There will be top players from England, Scotland, Wales, the Republic of Ireland and Northern Ireland,” Drew told Guardian Sport.

Last year’s British Blind Open had to be cancelled due to Covid.

Drew thanks all involved in the organisation of the event and said he looks forward to welcoming all the visiting players.