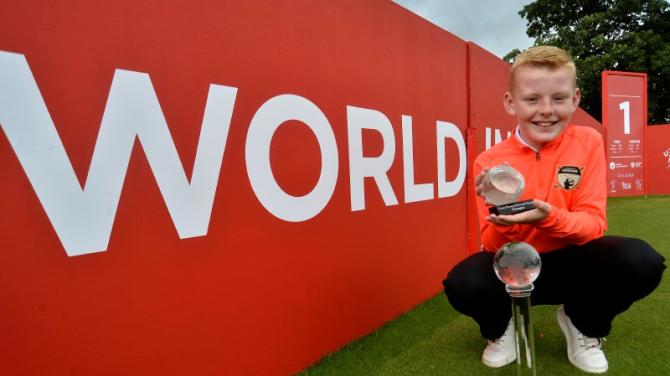 The nine-year-old Ballykeel lad turned in a five star showing in the FloGas Champion of Champions Junior Invitational in County Wicklow.

His stunning performance against the best from all over the world earned him the coveted crown.

Dad Gary said he and his family are “over the moon” with Parker’s success.

Managed by the multi award winning MG Pro Golf, it is their goal to bring together the top junior golf champions from all over the globe for a VIP Champions event like no other.

After years of managing one of Europe’s largest junior golf tour events across the world, they are now delighted to present this prestigious Champions Individual.

Having close connections to the legendary Gary Player their goal is to give junior golfers from all over the world a once in a lifetime opportunity to experience a five star tournament on one of Ireland’s finest Championship courses at Tullygarris Hotel and Golf Resort in County Wicklow.

On Day 1 he shot an amazing 7 under par on his first ever 18 hole competition - the best score over all age groups competing.

This paid dividends as Parker went out the first day and shot an amazing 7 under par on his first ever 18 hole competition - the best score over all age groups competing.

In his round he was able to shoot 9 birdies and this gave him an 8 shot lead over second place.

But a lapse in concentration saw him triple bogey on the 6th, before a birdie on the 7th hole brought him back into contention.

And he went from strength to strength hitting 2 eagles on the back 9, 1 was a chip in from roughly 65 yards!

Parker finished the round shooting 1 under par and finishing with a great score of 8 under par to take the Irish Open championship crown.

He was the only player over all age groups to finish under par - an amazing score proving that his hard work on the course is paying off.

Parker thanks his amazing caddy who works tirelessly to coach him everyday, pointing out that without him he just wouldn’t be the same golfer!

Special mention goes to his coach, Gareth Maybin, who has taught him so much, and to Galgorm Castle Golf Club for always giving him great advice and being a brilliant course to practice on all the time.

Parker is full of praise for his family who do everything for him including taking him to all the competitions - all over Northern Ireland, the South of Ireland and Scotland!