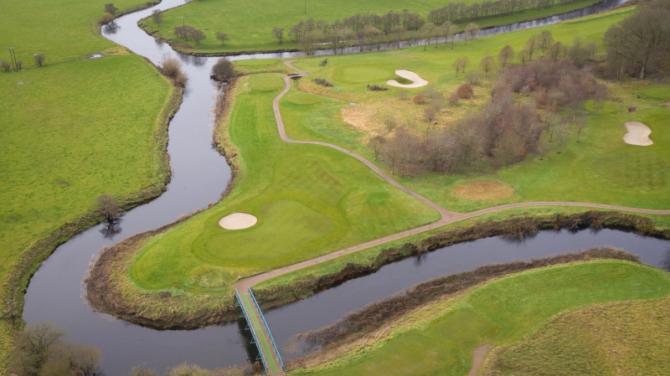 At halfway two handicapper David Stirling Jnr. and Paul Wilson (2)were setting the pace two shots clear of Matthew Reid (3) and Stephen Black (9) followed by Lennox (10), another shot behind.

Through The Maple Stirling jnr. and Wilson continued to lead by two shots from Reid.

Up the Grove Stirling jnr. after two pars and a birdie had taken a one shot lead over Wilson (par, bogey, birdie) who was another four shots clear of Reid (two bogeys and a par) with Lennox (three pars) close up another shot behind.

Black (bogey, double bogey, bogey) was down by another shot with Kernohan (bogey and two pars) three further shots away.

Approaching the fourteenth tee O'Kane was the new leader by a shot from Wilkins followed byMcAuley, Adams and Fitzsimmons another one, two and three shots respectively further behind. Over Beechers and up the Grove with two to play O'Kane (bogey, par, double bogey), Wilkins (bogey, par, bogey) and Adams (three pars) were vying for the lead a shot ahead of McAuley (bogey, birdie, double bogey).

Wilkins (bogey, par) was a further shot back with 69 Nett.

Brian McFall (29) was a further five shots behind followed by Austin McGillian (24) another shot down. Declan Traynor (23) was a further two shots back.

After The Maple Logan was still leading by two shots from Stewart. McGillian, Traynor and McFall were a further seven, eight and nine shots respectively behind.

Traynor (three bogeys was a further two shots away and McFall (triple bogey, double bogey, par) another five shots back. McFall came in with two bogeys and won Division 3 with a 67 Nett.

McGillian (bogey, double bogey) came second with a 68 Nett. Logan hit bogey trouble at the Lowlands and finished with a par for a 69 Nett.

After the front nine Graham Murray (22) was leading by a point from Andrew Young (24).

Young moved into the lead through The Maple, two points ahead of Murray ('ding' at eleven), who was joined by O'Shea.

Another point behind came McNeill ('ding' at twelve). Gray and Galloway were a further point away.

A 'ding' up the Grove by Young after a par and a birdie enabled O'Shea (three bogeys) and Murray (two pars and a double bogey) to close to within one point.

McNeill (triple bogey, par, double bogey) and Galloway (bogey and two pars) were another point behind.

Gray (par and two bogeys) was a further point away.

Congratulations to John McCarley who holed his tee shot at the par three fourteenth.