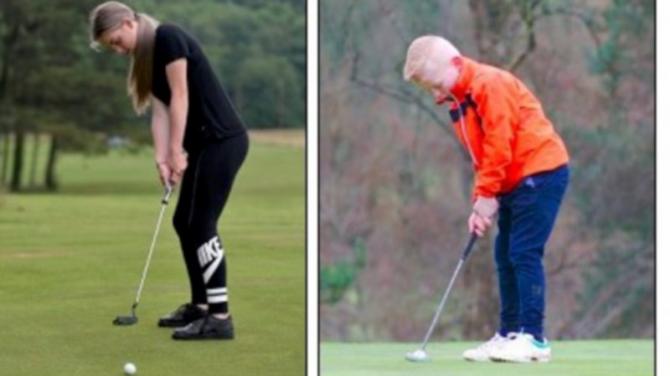 Mollie (12), from Ahoghill, and Parker (9) from Ballymena, were competing last week at Mount Wolseley in County Carlow.

After top performances in their respective Sections the talented duo were able to bring the coveted titles back on the Borough.

Later this month they will be hosted at a special reception, given by Mid and East Antrim Mayor, Cllr. William McCaughey, at The Braid (Town Hall), to honour the impressive double title haul.

“Mollie’s grandmother, who passed away on June 25, adored her,” outlined Mollie’s mum Rachel.

“Her grand mum was out a fortune every time Mollie won a competition, as she made a deal that she would give her money for every first place! Granny Blair would be so proud of how Mollie played in the Irish Open!”

For Mollie the recent USKids victory is her biggest win so far.

But she is hoping more silverware and titles will follow.

In the opening round at Mount Wolseley Mollie shot a 93, placing her in first position.

Her second placed rival was 11shots behind.

Mollie had to dig deep to find her feet on what is a very challenging and prestigious course; her total yardage was 5,040 over the 187 holes.

During her title bid Mollie played in some horrendous weather conditions, but stuck to her task.

In round two she had a smooth run right from the start, having a better knowledge of the course. And she turned in one of her best rounds of golf so far in a competition, despite being under pressure playing alongside some very talented young golfers.

Mollie finished on a score of 87 shots with her overall totaling 180 in the tournament giving her a comfortable win of the Girls age 12 to 14 Section.

The Irish Open champ thanks her grandparents, and her great grand parents in Scotland, for helping fund her competitions.

Mollie also thanked family friend Joe O’Hara for his continued support and for coming down to cheer her on at the Irish Open, along with her granda Jeff Blair.

And Dunclug College pupil Mollie said she missed her granda Jimmy Douglas, who keeps her calm and never misses a game, - but who could not get to the Irish Open due to work commitments.

Meanwhile, Ballykeel Primary School pupil Parker and family went to the USKids Irish Open a coupe of days early so he could get in some practice prior to the showdown.

This paid dividends as Parker went out the first day and shot an amazing 7 under par on his first ever 18 hole competition - the best score over all age groups competing.

In his round he was able to shoot 9 birdies and this gave him an 8 shot lead over second place.

The second day saw Parker start off very well sinking 2 birdie putts on the first 5 holes. But a lapse in concentration saw him triple bogey on the 6th, before a birdie on the 7th hole brought him back into contention.

And he went from strength to strength hitting 2 eagles on the back 9, 1 was a chip in from roughly 65 yards!

Parker finished the round shooting 1 under par and finishing with a great score of 8 under par to take the Irish Open championship crown.

The Ballykeel lad was the only player over all age groups to finish under par - an amazing score proving that his hard work on the course is paying off.

Parker thanks his amazing caddy who works tirelessly to coach him everyday, pointing out that without him he just wouldn’t be the same golfer!

Special mention goes to his coach, Gareth Maybin, who has taught him so much, and to Galgorm Castle Golf Club for always giving him great advice and being a brilliant course to practice on all the time.

Parker is full of praise for his family who do everything for him including taking him to all the competitions - all over Northern Ireland, the South of Ireland and Scotland!

In the past month Parker also won the US Kids North of Ireland Summer Tour and has his sights set on winning the Darren Clarke Trophy for the first time!