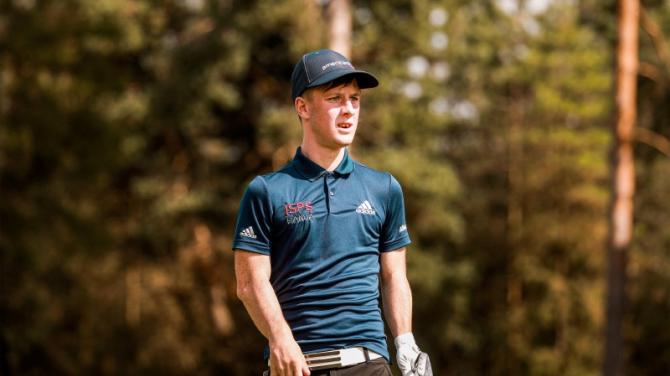 BRENDAN Lawlor will fly the flag once more for disability golf when he tees it up in tomorrow’s first round of the Northern Ireland Open, supported by The R&A at Galgorm Spa & Golf Resort.

This week’s event marks the return of the European Challenge Tour where Lawlor is one of 16 Irish competitors in the field. The Northern Ireland Open marks a historic month for the Ballymena venue as Galgorm will also host the Dubai Duty Free Irish Open on the European Tour from September 24-27.

Lawlor arrived at Galgorm making his own piece of history by competing in last week’s ISPS Handa UK Championship on the European Tour at The Belfry.

He continues to raise the profile for disability golf around the world, mixing media commitments with time on the fairways and the 22-year-old is determined to make his mark at Galgorm Castle this week.

“This week I have a new focus, I’m trying to play well and shoot good scores. I played well here [at Galgorm] last year so hopefully I can go out and do the same again this year,” said Lawlor, who is currently fourth in the World Rankings for Golfers with Disability.

“Last week at the Belfry was huge. The coverage I got helped get the message across for disability golf. I get great support from the likes of the European Tour, ISPS Handa and our team at Modest! Golf.

“For players like me to get the opportunity to compete alongside tour players helps raise our profile. I got a lot of traction with so many comments and good wishes on social media after the Belfry and it’s continuing through to this week at Galgorm.”

The European Tour support disability golf and Lawlor is hopeful that one day a world disability tour can emerge. The Dundalk golfer also believes it’s time for golf to be played at the Paralympics.

“To get golf into the Paralympics would be huge. Hopefully what I continue to do will help the cause. After golf returned to the Olympics, I think it’s time for golf to come into the Paralympics too. That would be a massive step forward. There’s a lot of talent out there,” added Lawlor, who has a rare condition called Ellis-van Creveld syndrome. A disability characterised by shorter stature and shorter limbs.

For now, Lawlor is focused on Galgorm. “The place looks great; the course is in fantastic condition and the greens are running pure. The rough is difficult around Galgorm but I still think there will be plenty of birdies. Well, plenty of birdies for other people, not sure about me,” jokes Lawlor, who accepts he will be coming into greens with longer irons compared to other professionals.

“That said, I’ve worked on a few things with my game and feel like I’ve gained more distance. I can’t wait to get going again.”

The Northern Ireland Open supported by The R&A will be played behind closed doors, while adhering to all Government and Tour safety protocols.

European Tour Productions will have daily highlights programmes through www.europeantour.com and the tournament website www.niopen.golf.

Tournament highlights will also be shown on Sky Sports with daily updates on local TV networks.