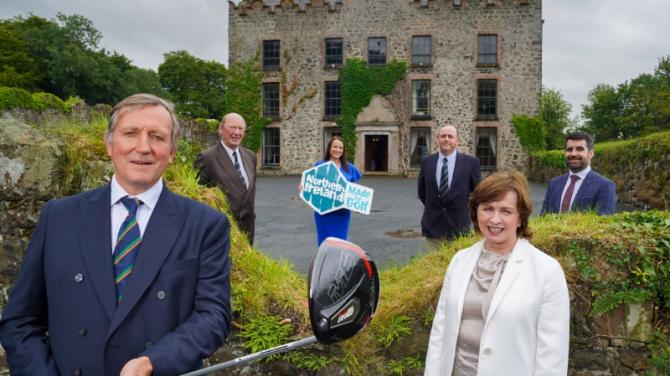 Speaking after the European Tour announced that this year’s tournament would be hosted by Galgorm Spa and Golf Resort in Co Antrim on September 24-27, the Minister said: “It is wonderful to see top class golf return to Northern Ireland so soon. After the success of the Open Championship at Royal Portrush last year and of recent Irish Opens in Portstewart, Royal County Down and also Royal Portrush, Northern Ireland is proving once again that it is made for golf.”

“I want to send thanks to the European Tour and Tourism Northern Ireland for their work in bringing this prestigious event to Northern Ireland and to Galgorm Spa and Golf Resort for stepping in at short notice to host it. Galgorm is one of our premier golf courses and it has proven over the years, through hosting the Northern Ireland Open and latterly the ISPS Handa World Invitational, that it is a first-rate venue capable of rubbing shoulders with any on the European Tour.

“This will be another opportunity to showcase to the world how Northern Ireland and top class golf work well together. I know this year’s event will be a huge success.”

The Dubai Duty Free Irish Open was originally due to be held in Mount Juliet in Co Kilkenny but, with quarantine restrictions for travellers into the Republic ongoing, the European Tour made the decision to move the tournament to Northern Ireland where it will be subject to similar guidelines to the ‘UK Swing’ series of tournaments currently taking place in England and Wales, including being played behind closed doors.

Tourism NI Chairman Terence Brannigan said: “The return of the Dubai Duty Free Irish Open to Northern Ireland is a significant boost for the local tourism industry at this challenging time. It puts Northern Ireland back into the global spotlight where it belongs. While Covid-19 restrictions on attendance at the event will be necessary, it will be televised to over 100 countries allowing a huge audience to see what Northern Ireland has to offer.

“This is a real vote of confidence from the European Tour and I want to thank them for placing their trust in Northern Ireland.