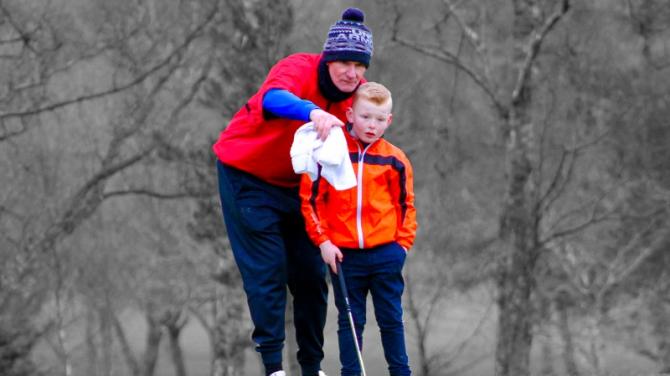 The 7-year-old, who plays his golf at Galgorm Castle, and receives coaching from former European Tour professional Gareth Maybin, is currently leading over 300 competitors in the quest to win the newly named Darren Clarke Trophy.

Also on offer is a set of the much sought after Ping Prodi G golf clubs.

Parker, a pupil at Ballykeel Primary School, has been in great form shooting six under par in his opening event.

And with only one event remaining in the Winter Tour at Portmarnock Links, Parker is in a great positioin to become the first golfer in the history of the ‘Flogas Irish Junior Open Tour’ to defend his title.

Due to Parker’s success in the Winter Tour, he has now qualified for the Summer ending VIP Tour Championship, which is an invite only Irish Junior Open event.

Parker has also qualified to compete in the Irish Junior Open’s sister event, the ‘Flogas Champion of Champions’ which is a Junior Golf Invitational event for some of the worlds top young golfers.

This new tournament ran by the award winning MG Pro Golf will have 220 competitors from over 25 countries competing, and is to be played at the 5 star Powerscourt Golf Club over Easter (April 15 and 16).

To be kept up to date with Parker please follow the Irish Junior Open on social media, or for more information on the upcoming ’Flogas Irish Junior Open Tour’ events for boys & girls aged 5 to 18 please visit www.