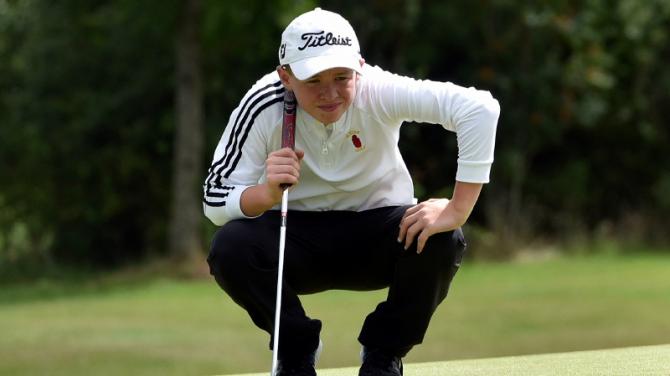 The Ballywatermoy player, who just turned 16 last week, is one of 10 amateurs invited to play in the star-studded event.

Joshua has been in very good form of late.

Back in April he won the Connaught Open Under-16 event at Galway Bay.

He followed this up by taking third at the Ulster Boys Under-18 event in Donegal.

In June Joshua got back to winning ways with victory in the Leinster Under-16 Boys Open at Beaverstown Golf Club in Dublin.

In the Connaught Under-18s Joshua finished a creditable runner-up.

And at the end of July he won the English Under-16 Boys’ Open Amateur Stroke Play - and the McGregor Trophy!

This Championship attracted a top quality field of English and international players.

The 72-hole stroke play championship was played over three days.

Enroute to McGregor Cup glory in Nottingham, Joshua set a new course record with a 64.

He shot a level par 70 in the last round to come from behind to win the Championship at Radcliffe-on-Trent.

He started the final round four shots behind Scottish Under 16 champion Cameron Adam.

But he took advantage of an uncharacteristic display by the Scot who carded two double bogeys in an opening nine of 40 before coming home in 35.

Joshua’s four-under par aggregate of 276 was enough to see him finish one shot ahead of Adam and three in front of Spain’s Eduardo De los Rios whose closing round of 67 included seven birdies and a seven on the long seventh hole.

In the Scottish Under-16 Open at Royal Burgess in Edinburgh the Galgorm Castle teen finished third.

Just last week the Ballymena Academy pupil was in Wales with the Ireland team competing in the Home Internationals.

Joshua won all six of his rounds - but even that could not stop England piping Ireland by a single point for the title! This week’s World Invitational call-up is a major coupe for young Joshua.

He will get the opportunity to shine on his home course - and cannot wait to tee-off.