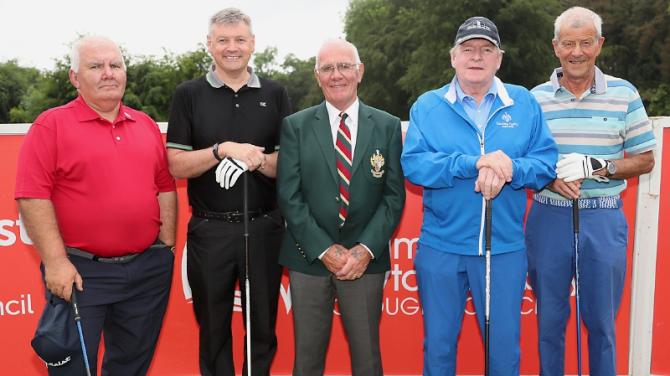 THERE was a good turn out of over 200 golfers for Captain's Day at Galgorm Castle Golf Club.

Captain’s Prize was won by 20-handicapper, Kevin Devlin with 45 points.

After an early burst of sunshine the weather turned to rain and very soon the 'horn' was heard after bursts of thunder and lightning causing the competition to be stopped for almost an hour.

The early starters were wished a good round of golf by the Captain, Mr. Sam Graham.

Through the front nine and McCart was one point ahead of Devlin with Jonathan Rodgers (6) another point behind. A further point back came Matthew Reid (8) and Michael Greer (7).

Approaching the 14th tee Devlin was leading by three points from McCart, Rodgers and Reid. Greer was a further point down.

Devlin finished with two pars and increased his lead to win the Captain's Prize by two points from McCart (two pars) in the Runner-up placing.

Rodgers (two pars) was another point behind and won Division 1 a point ahead of Reid (par, birdie) in second place.

Greer (bogey, birdie) was another point behind and won the Seniors.

In Division 2 Aaron Steele (13) was leading by three points from Jim W£ilson (14) and Aidan O'Kane (14) at halfway with Trevor Fletcher (13) another point behind.

Through The Maple Steele, O'Kane and Fletcher were vyting for the lead three points ahead of Wilson, falling back after a 'ding' at The Fort.

Approaching the Lowlands, O'Kane after two pars and a bogey, was leading but being hard pressed by Steele (three bogeys) and an improved Wilson (birdie and two pars) with Fletcher (two bogeys and a 'ding') a further three points behind.

O'Kane lost his chance of winning after a bogey at the Lowlands and failing to score at eighteen. Wilson (bogey, par) and Steele (bogey, par) came home together with Wilson taking first place with a better back nine.

Fletcher (par, birdie) and O'Kane finished a point behind the placings.

After the outward half in Division 3 Ciaran Doherty (17) had a slender one point advantage over Dan McCullough (16) with Colin Black (15) a further two points behind.

At The Maple McCullough was leading by two points from Doherty with Black a further point away.

Over Beechers McCullough, after a bogey and a double bogey, was joined in the lead by Doherty (bogey, par) two points ahead of Black (double bogey, par).

Down the Lowlands Doherty (par, bogey) led by one point from McCullough (two bogeys) with Black (two pars) another point behind.

Doherty 'dinged' the last and was joined by McCullough with a double bogey.

However Black, with a par, took advantage of these two mistakes to lead for the first time on the back nine and win by one point from McCullough (better back nine) in second place.

Entering the back nine in Division 4 Tony Quinn (29) held a comfortable four point advantage from Brian Mitchell (15) with Robert Barkley (20) another point back.

Through The Maple Quinn after hitting bogey trouble at eleven ande thirteen was joined by Barkley four points ahead of Mitchell.

Quinn regrouped and with two pars and a bogey regained the lead by three points from Barkley (two bogeys and a double bogey). Mitchell (bogey, par, bogey) was a further point away.

Quinn finished 'ding', double bogey and was joined by Barkley (two bogeys) and with a better back nine Barkley took first place with Quinn second.

All in all a very enjoyable day with the golfers treated to a 'goodie' bag at the start and a choice of food at halfway. There was also the prize awards and an evening meal with musical entertainment.

Congratulations to Clifford Irvine who holed his tee shot at the par three fourteenth.