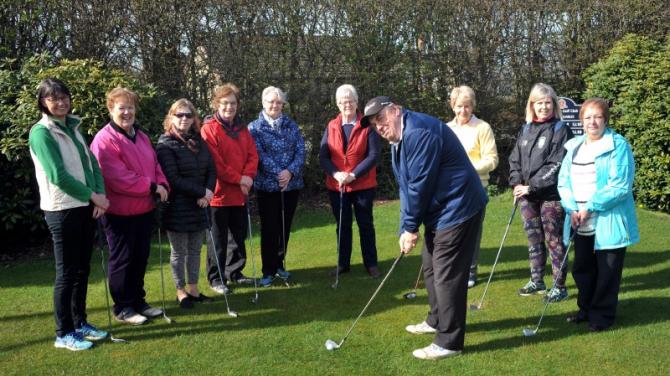 THIS years Da Prato Cup was contested in splendid fashion with the field taking full advantage of the improving weather.

With scoring high, it took a remarkable 44 points to win the trophy with victory goinjg to Clifford Worthington.

Teeing off at 7.30am he laid down an early morning marker that proved too difficult for the rest of the field to match.

Playing off a handicap of 17, Worthington bolted out of the blocks with 3 straight pars before dropping his first shots at the 4th & 5th.

He settled back into his game to card another string of 3 pars before scoring bogey at the Larches.

This gave him a total of 23 points for his outward 9.

Worthington then struggled around the difficult ‘loop’ section of the course, dropping 5 shots in the testing 3 hole stretch.

The Hatchery hole was a much better experience with Worthington holing out for an impressive birdie.

He used this as a catalyst to finish his round with 3 more pars and 2 bogeys giving him a total of 23 for his inward 9.

He maintained his excellent run of form to score 42 points and secure second place.

Nixon (18) used his shot a hole allowance to his advantage by scoring 2 pars and 7 bogeys on his front 9.

His back 9 showed further improvement as he recorded 4 pars and 5 bogeys.

Three players scored 42 points this week and it was Nixons strong finish that enabled him to finish second courtesy of a better back 9.

In 3rd place was William McCartney (19). He impressed with 8 pars, 7 bogeys and 3 double bogeys scoring equal 9’s of 21 points.

Perennial gross winner, Gary Black (3), made the most of the afternoon conditions to card a level par 68 and win this weeks gross.

In 4th place this week was won by Colin Thompson (26). He will be proud of his par, at the hardest hole on the course, scoring him 4 points on his way to a total of 42.

The final 2 places on the leaderboard was another tight affair with both players scoring 41 points.

Ballymen’as Holt Shield team began their season with a draw away to Knock Golf Club.

Chris McCrory and Paul Stevenson gained wins for Ballymena. Gerry Rafferty halved his match for a share of the points.