Parker (7) ready for 'The Match' at Royal Portush 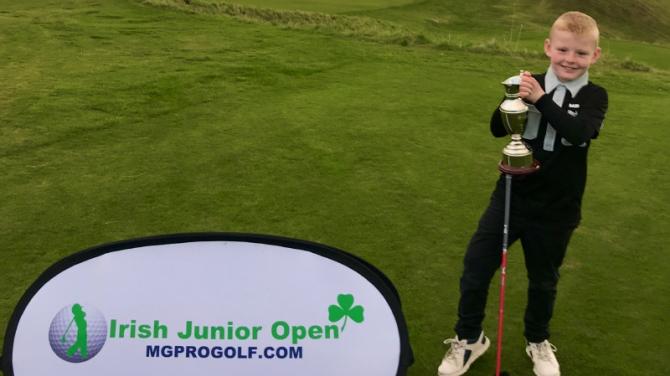 A unique champion ‘foursome, featuring Parker Bonnes, from Ballymena, will be teeing up at Royal Portrush this Friday.

And 10-year-old Harry O’Hara, of Clandeboye and Holywood golf clubs, the Junior Open’s Gary Player champion, will be partnered with Gary Murphy.

Both Cormac and Gary are Flogas brand ambassadors and are delighted to give the young champions a helping hand in trying to win their first ever game on one of the world’s finest courses.

'Flogas Irish Junior Open' founder Michael Gallagher of MG Pro Golf said he is delighted to have this special match take place just three months prior to the biggest show in golf.

“Royal Portrush couldn't have been more helpful in giving our current Irish Junior Open champions a once in a lifetime opportunity to play on the same course that Tiger and Rory will soon be competing,” said Michael.

“With two European Tour professionals onboard and a great headline sponsor in Flogas, it’s going to be a very exciting match to watch. I look forward to adding more great events and opportunities like this for our future stars in the coming years.”

The local lad also won the British Championship at St. Andrews in Scotland.