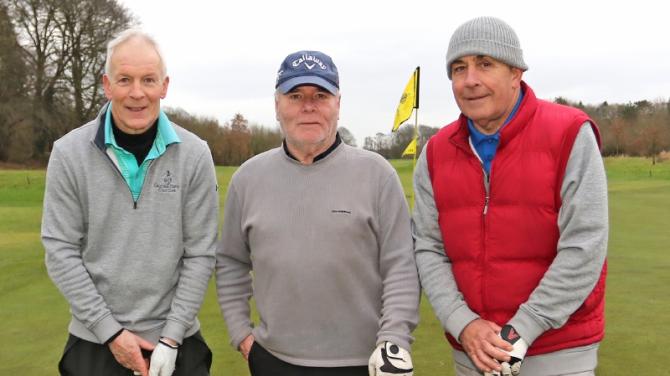 Approaching The Niuc, after opening with a bogey, eagle two and a birdie, he, and John McCarry (birdie, par, birdie) were setting the early pace two points ahead of Gary McWilliams (three pars) and Ian McCully (three pars) with Ryan Addley (bogey and two pars) another point behind.

The positions remained the same over The Niuc. Down Broadmeadows Reid had opened up a two point lead over McCarry who was joined by McCully.

McWilliams and Addley were a further point behind.

Reid held his two point advantage with a par and a bogey over the next two holes from McCarry (par, bogey), McCully (bogey, par), McWilliams (two pars) and Addley (two pars).

Reid parred the Longlands to win by two points. McCarry, McCully, McWilliams and Addley all parred the final hole to finish together and with a better back six second place went to Addley. Jordan Hood won the Gross.

Antony Blair was leading by two points in Division 2 after the Trout Hole from Kevin Duffin, Brian Watt and Darryl Robinson after an opening run of three pars.

Blair (two bogeys and a par) continued to lead but Duffin (bogey and two pars) and Watt (two pars and a bogey) had closed to within one point of the leader.

Robinson (bogey, par, bogey) was another point behind.

Blair finished with a par and two bogeys and was joined by Watt with a par, bogey, par, finish.

However Duffin came through with three pars to win by one point.

Second place with a better back six was taken by Watt. Robinson (three pars) was a further point behind.

Through The Maple in Division 3 Eric Boyce after opening with an eagle three at The Fort then ran into bogey trouble with a double bogey and two bogeys.

Up the Grove Logan had moved into a two point lead after a birdie and two pars from Boyce, McNeilly, Tumilson and Halliday. McAuley fell at Beechers and was another point behind.

Logan finished with another par and a birdie to win by two points from an improved Halliday (par, birdie).

Order of Merit - Neville Neill still leads the Order of Merit but his lead has been cut to three points by second placed Shane McQuillan.