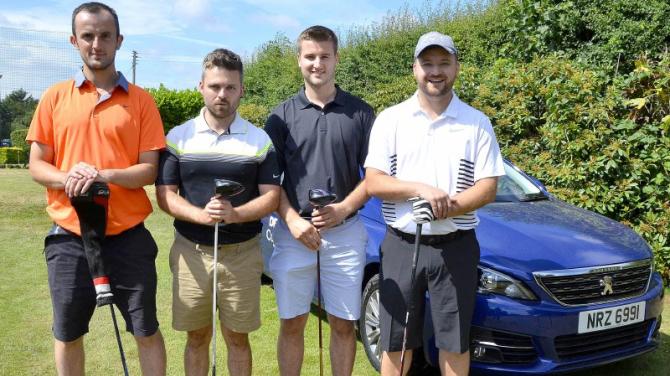 OUTSIDE the captain’s prize the most sought after trophy is the Harry Harper which was presented to Ballymena Golf Club for competition over three rounds ie 54 holes by the Harper family.

July 7 saw the first 18 holes and the winner was Brian Dempster (18) who has set a lead of three shots having scored a nett figure of 60 with three competitions having returned a nett 63.

Dempster opened his round with four pars and then completed the first nine with a further two pars, two bogeys and a double bogey on the fifth to be four over entering the second nine.

Having parred the 10th Brain then dropped five shots over the next three holes but he completed his round with two pars, two bogeys plus a birdie in the 16th which added up to a pair of 39's for a gross 78 less his handicap of 18 leaving him with a nett 60.

Second place was taken by Quinton McKee (23) who returned a nett total of 63 with a better second nine from Rory Drysdale and Luke Mullan.

Quinton went through the front nine in 10 over while the back nine amounted to eight over 41 in total he scored six pars, seven bogeys plus, four double bogeys and a triple bogey on the 15th which was better than Rory Drysdale over the back nine.

Rory (19) went through the first nine in eight over having scored five bogeys, two double bogeys plus he birdied the fourth and he parred the seventh.

The second nine resulted in five pars, two bogeys and a double bogey on the 12th and 16th for a total of six over and a better second nine from Luke Mullan (10).

Luke went through the outer nine in two over having registered seven pars plus a dropped shot on the first and third.

The inward nine resulted in four pars, four bogeys and he birdied the 13th for a gross of three over and a nett of 63.

Fifth place was taken by Mike McVeigh (29) who dropped 14 shots on the first nine holes while the second nine was accountable for a further 11 shots and an overall total of 93 less his handicap left Mike on a score of nett 64 and still very much in the hunt.

The sixth place was taken by Kenny Morrison (21) with a nett sixty four only on a worse second nine score from fifth place.

In total Kenny scored four pars, 12 bogeys and he double bogeyed the first and a triple bogey came on the 11th.

The best gross card came from Michael Smyth (5) who got back on the gross trail with a round of two over gross 70.

Michael's opening nine holes was played with seven pars while the third and fourth were birdies.

The inward nine resulted in five pars with a dropped shot being on the 11th, 14th, 16th and 17th leaving him on two over for the round.

The Open Stableford on July 1 resulted in Ryan Foster with a shot allowance of 13 going to town and he posted a score of 44 points.

Ryan's first nine holes yielded a total of 25 points having scored six pars, a dropped shot on the eighth while he birdied the second and ninth.

The second nine added 19 points and that included a ding on the final hole with the other eight holes being five pars, a bogey on the 15th and 17th.

Runner up was George Horner (14) who registered 38 points and on a better second nine total from Lawrence Kerr (15).

Horner had 18 on the front nine having had a par on the ninth, a birdie on the seventh, six bogeys plus a double bogey on the second.

The second produced 20 points having had two pars, six bogeys and he had a super birdie on the final hole which was a very steady round.

Lawrence Kerr notched up 21 points on the outward trip having registered six pars, two bogeys plus a double concession on the second.

The homeward journey added two pars, five bogeys plus a double bogey on the 13th and 14th which resulted in an additional 17 points and 38 in total.

The best gross card was submitted by Andrew Adams (8) who played the course in 76 shots. In total he scored nine pars, five bogeys, a double bogey on the second, a triple bogey on the 11th plus he birdied the ninth and 18th.

The Sunday Open Stableford on July 8 resulted in a win for David Smith who playing of a handicap of seven produced a total of 41 points.

A front nine of six pars, a dropped shot on the eighth was replaced with a birdie on the two par fives ie third and nineth giving David an outward total of 22 points.

Into the second nine with a par followed with two dropped shots Smith completed his round with three bogies, a par on the 13th he then birdied the 16th and 18th for an additional 19 points and an overall 41 points which was enough to win by two points from Warren Overton second and third placed Adam Gregg.

Overton (27) went through the opening nine which yielded 19 points and in that total Warren had a “blank” on the third and nineth.

The second nine produced 20 points and again a blank came on the 14th while a par on the 12th was rewarding having resulted in four points.

Third prize went to Adam Gregg (16) also with 39 points having scored 20 on the front nine where he had four pars while the back nine produced 19 points where he scored six bogeys, two pars plus a double bogey and a birdie on the 13th.

John Brown (8) won the Gross having scored a 74 tally. John recorded nine pars, seven bogeys plus a birdie on the 13th and 15th.