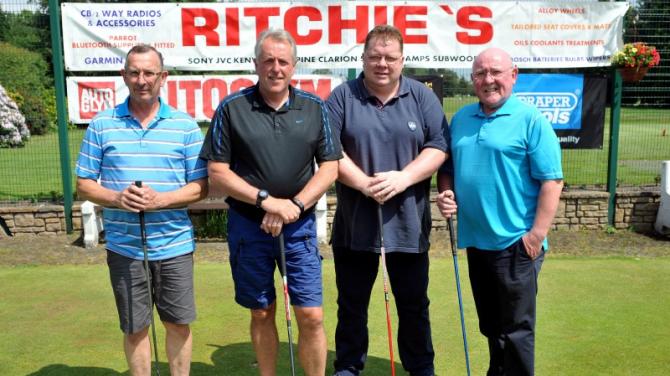 He and Michael Smyth (6) both finished with 41, but Derek had a better back nine total.

Derek's second nine was 22, a point better than Michael.

The first nine for Derek was 19 which included a non-return on the par four 6th.

The other eight were five pars, a dropped shot on the 2nd and 9th plus a birdie on the 7th.

Second nine was five pars, a dropped shot on the 11th, 12th and 14th and another birdie on the final hole for an additional 22 points.

Second placed Michael played the front nine in one over gross which was made up of six pars, bogeys on the 5th and 6th plus a birdie on the second for 20 points.

His second nine resulted in five pars, a dropped shot on the 11th and 12th which he retrieved with a birdie on the 16th and 18th for an additional 21 points giving him a round of one over gross.

Third was Brian Mitchell (26) with 40 points of which 22 came from the second nine.

He played the front nine with three pars, a bogey, three double bogeys plus a triple bogey on the 5th and the 9th was a non-event.

Second nine was somewhat better where he had a trio of pars, four bogeys, a double bogey on the 11th plus a triple bogey on the 15th and that represented an additional 22 points.

Fourth nett winner was Chris McCrory (7) who amassed 40 points having scored six pars, birdies on the 3rd and 7th with a dropped shot on the 8th on the first nine. Second nine was three pars, five bogeys and a very rewarding birdie on the final hole for another 18 points and 40 in total.

Fifth was David Martin (18) with 38 and on a better second nine tally.

He began with a double bogey, bogey and a non-score on the 3rd and went on to compete the outward nine with four bogeys and pars on the 7th and 9th for 17 points.

The homeward trip resulted in four par, four bogeys and a double concession on the 15th which amounted to 38 points and on a better second nine total from sixth placed John E. Quigley (19) who scored equal nines of 19 points.

Best Gross was Michael McGarry (4) who played the 18 holes in level par 68 shots having been through the first nine in one under par while the second nine cost him one shot.

The 50 Years Plus Open Stableford on June 4 was won by Quinton McKee (23) who returned 39 Stableford points.

He made good use of his handicap allowance scoring very steadily having recorded seven single bogeys plus a double bogey on the 3rd and he completed the front nine with a par for 20 points.

Second nine was six bogeys, a double bogey on the 11th plus a par on the closing hole and he had a non score on the penultimate hole which added another 19 points to his total.

Second was Eugene O'Dornan (17) who posted 37 points of which 19 came from the front nine , and that despite a blank on the par three 7th.

The opening nine opened with four straight pars and then two double bogeys. He completed the nine with a par and a dropped shot.

Back nine was three pars, three bogeys and a double bogeys on the 11th, 12th and 15th for an additional 18 points.

He had a par on the 7th and 13th with eight bogeys and eight double bogeys. Credit goes to him as he scored a least a point on every hole which made for a score and the consolation of playing to his handicap.