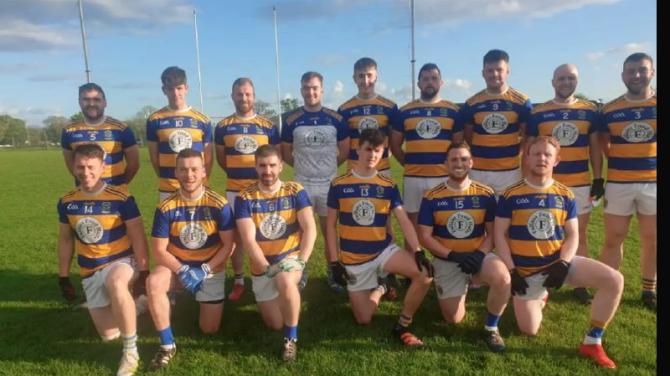 RASHARKIN recorded their second win in the Division 2 football league, away to Glenavy, one which eases the pressure slightly as the move out of the relegation zone. On five points now and ahead of South A ntrim sides Sarsfields and St Teresas, things are looking up.

A Shane Hasson goal, eight minutes into the second half proved the decisive score as St. Mary’s took a step up the ladder as Glenavy stay put on nine points and in no immediate danger.

The sides were level ay 0-5 each at the intervalwith Fergal Henry and Malachy Doherty firing Glenavy into an early lead before Conor Higgins relied for the visitors to leave it 0-2 to 0-1 with ten minutes played.

Rasharkin introduced Ryan Lynch early in the half and he made a telling contribution as he scored two points in the lead up to the break with Thomas McMullan and Shane Hasson also on target to leave it all square as the change of ends..

Eamon McNeill edged Rasharkin ahead with an early second half point and Shane Hasson put the visitors in a strong position when he fired to the net with eight minutes gone.

The Chapel Hill side replied with points from Fergal Henry and Malachy Doherty to close the gap to two before Gerard O’Hagan moved the Dreen side three ahead, with a point at the end of the third quarter.

The home side continued to battle and a Fergal Henry point in the twenty second minute left just two between the sides once more but a well struck free from keeper, Andrew Hasson from 45 meters and near the touch line proved the decisive score as Rashakin withstood a late surge to claim two very useful points.