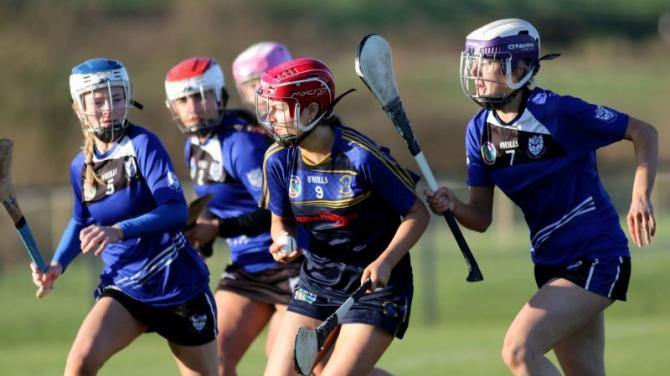 ST. Louis' victory in this Corn Uan Uladh schools camogie semi final was akin to Lazarus being raised from the dead.

Behind by a dozen points at the half way stage they certainly looked dead, if not buried.

Then in a sensational second half at Ahoghill, they hammered home four goals and the same number of points as against just three points from the Derry school to win by a single point.

The first half belonged to the St Pats girls and while they were not as dominant as their half time lead suggested, they nevertheless appeared to have one foot in the final when they led 4-4 to 0-4 as the half time whistle sounded.

St. Louis and their opponents St. Patrick’s lined out in very similar colours at the start of this game in Cloney and St. Louis manager, Chloe Draine decided to turn her sides shirts inside out for the second half.

By the tenth minute they had committed Hari Kari when they conceded three goals as their defence went AWOL, gifting the St Pats attackers the easiest of tasks and all but brought their own campaign to an abrupt halt.

The first came with a long ball out of defence finding Carla McEldowney in the right corner and on both occasions a low cross was picked up by Aimee Lennon for the first two goals.

St Louis were forced to bring Katie Molloy back as sweeper to close out the goal threat but it left the Kintullagh girls missing her influence in attack as St Pats struck again.

There was a bit of good fortune surrounding this one at the end of the first quarter when the Ballymena goalkeeper Orlagh Convery appeared to lose sight of Evanne Martin’s shot in the blinding sunhine.

Maghera continued to press during the remainder of the half and looked to be in pole position when they led 4-4 to 0-4 at the change of ends with St. Louis getting a late point from Anna McKillop.

With the change of tops seemed to come a change in attitude from the Antrim side and Kyra Doherty got the second half off to a flying start with a goal and when Anna McKillop added a second after six minutes, St Louis supporters and their side dared to dream.

The momentum was now very much with the Convent as they battled for every ball, knocking the opposition out of their stride and minutes before the second water break Katie Molloy drove through the centre and fired to the net to leave just two points between the them at 3-6 to 4-5.

Anna McKillop’s point from a free left just one in it and the Cullybackey Road girls had the scent of victory in their nostrils as the final quarter got under way and the excellent Anna McKillop fired in a fourth Ballymena goal to level the tie.

The action continued to flow in the direction of the Maghera goal and Eimear Johnston might well have had a fifth Ballymena goal minutes later, but her shot skimmed over the cross-bar instead.

St. Patrick’s had been fighting a rear guard action for the greater part of the second half and finding it difficult to find a way through a now much more organised St. Louis defence but they broke forward and Evanne Martin levelled from a free and the game was still in the melting pot.

St. Louis were not to be denied however and McKillop knocked over the winning point from a dead ball four minutes from the end.

There were a couple of late chances for Maghera to take it to extra time, but St Louis held on to make it an all-north Antrim derby against Cross & Passion Ballycastle in the final for the third time in the last four years.