Calum is Schools' Hurler of the Year! 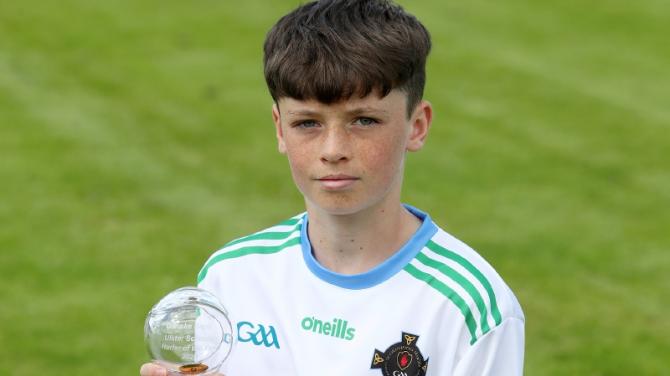 McIlwaine was the recipient of the seasons first hurler of the month back in October following three impressive displays in the Danske Bank McNamee Cup.

The diminutive midfield dynamo had played at centre half forward in winning the McNamee title for St Killians and then captained the side which narrowly lost the final to Cross and Passion Ballycastle.

A member of the Glenariffe club he displayed excellent leadership qualities, allied with a great workrate that saw him cover every blade of grass, sweeping balls in the back line, fielding puck-outs, winning breaking balland having the engine to drive forward to pick off key scores.

He scored 1-8 in the tree games during October and almost single- hand, kept the Tower in with a shout of winning the final against Cross and Passion.

A special photo shoot for the Glens thirteen year old saw him surrounded by friends and family when he was presented with his award by Ulster Colleges Sean McGourty.

The year nine student at St Killians College had just begun training for the Gallagher cup competition when the Covid lockdown ended all activity for the remainder of the school year.

"We won the McNamee title last year and that means we would have been pretty strong contenders for this seasons Galllagher Cup ", said McIlwaine, whose father Padraig is Vice Principal in the Tower and was the driving force behind the successful McNamee side.

"We had a few training sessions done and we would have been starting at the end of March".

In addition to the Gallagher cup disappointment Calum has also missed out on his final year in Feile and again his Ossins club would have fancied their chances there.

"We have lost the last two North Antrim finals to Loughgiel and we were pretty strong at Under twelve level a couple of years back so we are really looking forward to the club season."

Hurling is strong in the McIlwaine house hold, His father was a McNamee medal winner over three decades ago while his older brother Patrick alo picked one up a couple of years ago.

Calum won his last year and was disappointed not to have gone one better than both his father and brother, when he was captain of the Tower when his side lost out to Cross and Pasion back in October.

"I was gutted after losing that final", said Calum," because we were leading at half time and were in with a great chance right to the end. Probably the better side won though. Then I was surprised a few weeks later when I found out I was getting the monthly award. It wasn't the same as winning with your team but it gave me a lift".

Players were initially nominated by the coach of the opposing teams for a monthly award and this years five monthly winners then went head to head in an online poll run by the Irish News over a two week period.

Calum’s dad Padraig explained, "I think the monthly awards are very fair as coaches have to nominate a player from the opposing side. After that a decision is made on all nominations that month.

"So we were appreciative of the other coaches who nominated Calum in October, and, then, of course, all the monthly award winners were put into the mix for player of the year which went to an on line vote in conjunction with the Irish News."

Oonagh Murtagh, head of South Business Centre at Danske Bank said, "I'm delighted to announce the 2020 Players of the year, Calum and Jatlath-an achievement that should be cherished as they grow and develop in their sporting fields.

"The player of the month and overall player of the year initiative is a fantastic opportunity to celebrate the incredible skill across the Province and across all age groups of players.

" The high standard of all nominees this year has blown me away- any one ofthe nominees would have been a worthy winner.

"It's great to be able to recognise the efforts and skills of all of these young players as well as the dedication shown by their coaches, families, clubs and team-mats. Congratulations to you all."

“Heartiest congratulations to all our young players who made it to the final vote, and especially to Callum and Iarlaith on collecting these prestigious awards as our Hurling and Football Players of the Year.

“All of these young players produced outstanding displays during the year to win our monthly awards and this will hopefully be some recompense to Callum who missed out on a second medal in the MacNamee final!

“As regards Iarlaith and his school St Pius X Magherafelt, we in Ulster Schools’ Council are still hopeful that he will get the opportunity to add a MacLarnon medal to his collection.

“Ulster Schools’ Council and the individual schools that promote our games greatly appreciate the part the Irish News sports’ team as well as John Brolly play in promoting those games and we would like to place on record our appreciation to Danielle Baker, from our partners, Danske Bank, who has worked tirelessly in the advancement of our competitions and highlighting the accomplishments of our young players.”

BAD news for all the youngsters in County Antrim following the decision to cancel the Cul Camp programme for 2020.

This, on top of nearly six months absence from school due to Covid 19 will leave many in a state of utter confusion and frustration,

The decision to cancel this summer's activities in Antrim was taken recently and in a video conference with all concerned, County Youth Officer Tony McCollum laid out the reasoning behind the decision.

This is what the Creggan clubman said,"Cul Camps are a major event in the GAA calendar for our young people with approximately 2000 children attending Antrim camps annually.

The uncertainty over the last 106 days and, at one stage, the prospect of having no GAA activities for the remainder of 2020 have hindered the planning processes required to stage Cul Camps.

"Thankfully the position around GAA activity has changed greatly over the last few week and our clubs now look forward to playing our games again for the remainder of this year.

Continuing he said," We have no office base to work from as St Marys University College has been closed since the 20th March. Again we have no access to the storage required to receive Cul Camp gear for future delivery to clubs.

"Likewise all our coaching staff are on Furlough and we have to work within the existing Covid -19 restrictions ( i.e. no access to GAA buildings until the 10th August).

"We also sought to get the opinions of several clubs as to their willingness or not to host / run Cul Camps which also assisted in the decision-making process. The majority of clubs canvassed were not in favour of hosting camps.

"Based on all of the above the decision is that Antrim GAA will not be hosting Cul Camps during July & August 2020.

"While we know this will be a major disappointment to our younger players, we feel that in the best interests of all our members and the local communities in which our clubs operate it is the correct decision to take at the present time.

The revised draw for the Antrim hurling and football championships has just been released, events which will be played during July, August and September.

And ,as anticipated,as a warm up, a couple of rounds of league competition will go ahead from this week, football getting the nod first on Sunday followed by Hurling which begins the following Wednesday evening.

The hurling is a two group affair with four teams in each group. St Johns, Dunloy, Ballycastle and Rossa feature in Group 1 while Loughgiel, Cushendall, St Endas and St Galls make up the second group.

The three round robin games will be staged on August 9th, August 16th and August 23rd with the winners of each group qualifying for the semi finals.

The quarter finals are fixed for Saturday, August 29th with the semis going ahead on Sunday September 6th.

The final will be played a week later on Sunday September 13th.

In football there are four groups, three with three teams and one with four. Group 1 sees three South West sides, Creggan, Portglenone and Ahoghill in the mix with Group 2 comprising three South Antrim sides, St Johns, Rossa and Hannastown.

In Group 4 are St Galls, St Endas and Gortnamona will battle it out.

The top two sides in each group will make up the quarter final scheduled for August 30th with the semis on September 5th and the final September 20th.

Since taking over as Antrim Culture officer, Bronagh Lennon has left no stone unturned to push her beloved Scor.

The Aghagallan womans latest endeavour to whet the appetite for later in the year saw her use all the technology at her disposal to have a virtual scor.

Over eighty people took part in ‘Saffron Singers’ over the last four weeks with twenty clubs in the County involved within the County, the aim to encourage Scór participation in Antrim.

Lennon took the online sessions, where groups of children, teens and adults were able to learn basic skills needed for singing, in line with the criteria used in Scór. Each group was taught a new Irish traditional song each week.

The Culture officer said, "We are delighted with how successful the sessions were and we are hoping that the involvement in the online singing sessions will boost Scór participation in the months and years ahead.

"We are also deeply appreciative that the County chairman Ciaran McCavana also joined in.”