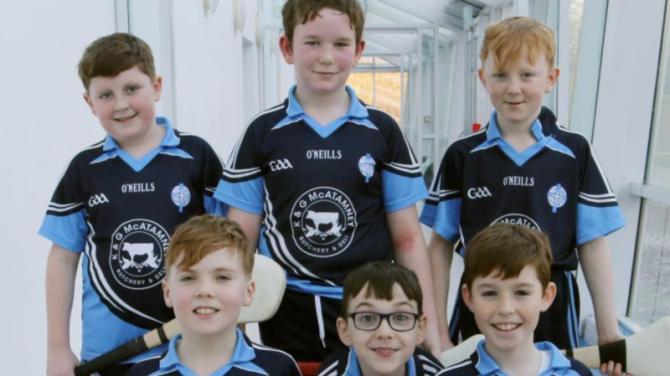 THE Antrim Forum was a hive of activity recently when the South West Antrim Allianz Cumman na Mbunscoil indoor hurling competition was staged.

Jim Brady, principal of St Brigids and Chairman of Cumman na mbunscoil, presented the prizes after an exhausting but thrilling days hurling.

In a tournament that saw teams take points from each other regularly it was always going to be a fiercely competitive affair.

In the round robin group stages St Colmcille’s Ballymena emerged on top, gaining the right to face Mary Queen of Peace Glenravel in the semi-final.

In the first semi a determined Mary Queen of Peace team stunned St Colmcille’s with their hunger and excellent fast paced hurling, running out 4 to 0 winners.

The second semi was close fought with extra time and a golden goal required to give the Creggan ypoungsters a 3 to 2 victory.

The final showdown saw Creggan go up against the Glenravel boys.

Creggan were fastest out of the blocks and looked to have the competition sewn up, holding a two goal lead with time almost up.

A dramatic fight back saw Mary Queen of Peace score a couple of lightning quick goals to force the game into extra time.

Showing their experience from the semi-final Creggan struck another ‘golden goal’ early to take the title.