Brave Ahoghill lose out to Glensmen 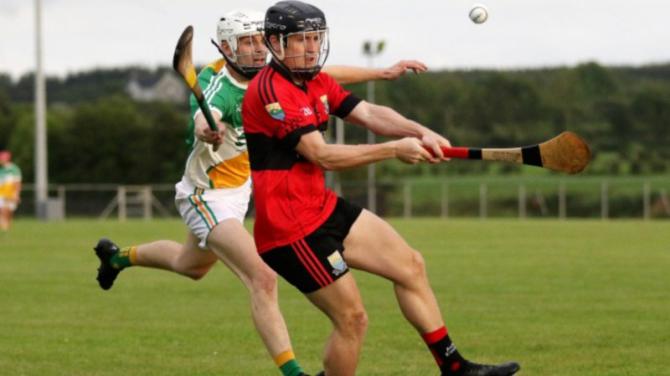 All County Hurling League Division 2B

THE Ahoghill men may have lost this first sectional league encounter, but in doing so put on a great show against Glenariffe who look the side most likely to win Division 2B.

Now two points behind the Glennsmen,, Ahoghsill should secure their grade two status with games against Tir-na-nOg, Armoy and Ckoughmills still to come.

Nothing had separated these two well matched sides for most of the contest but a PJ O’ Connell penalty goal ensured the Clooney men had nipped a couple of points clear at the start of the final quarter.

Glenariffe responded however with an Alex O’ Boyle goal at the other which proved sufficient to give the Waterfoot side a three point victory.

The home side were first off the mark and after PJ O’ Connell had opened account with a second minute point Pearse Downey quickly followed with a goal.

The visitors soon responded and in style when full forward Paul Mc Donnell netted at the other end to get them up and running.

Danny O’ Neill who has pace at plenty at his disposal nipped away on the left to raise a fine white flag and when Patrick Graham rose highest to fetch a Tom Mc Glone delivery he added another to see the home side at 1-3 to 1-0 ahead at the end of the opening quarter.

The Oisin’s were back on terms with Conor Mc Allister and Paul Mc Donnell points only to see Ahoghill push forward with PJ O’ Connell and Danny O’ Neill scores.

Further scores from, Alex O’ Boyle, Paul Mc Donnell and Alex Mc Donnell pushed the Glensmen to the front again only to be denied an interval advantage when P.J.O'Connell pointed a "65" to send the sides in level at 1-8 each.

On the restart O'Connell was at it again from a "65" as the end to end nature of the game continued with the Glensmen edging ahead by a point Paul Burns at the end of the third quarter.

A foul on Patrick Graham inside the square saw a penalty award and when the ever accurate PJ O’ Connell fired the sliotar to the net the Gael’s had gone a couple clear at 2-10 to 1-11.

They appeared to be again gaining the initiative as the last quarter progressed with the Gael’s rear guard standing firm and a couple of back to back points from PJ O’ Connell extended their advantage.

The Oisin’s stuck to the task however and a well taken fifty second minute goal from Alex O'Boyle gave them a two point advantage which they were never again to lose.

A fine Caolan O’ Conner point increased that advantage with a further double exchange between O'Connell and Paul McDonnell follwed by a Danny O'Neill and McDonne as the Glensmen held their ground.

While the Gaels threw everything at Glenariffe in the dying minutes the Glensmen stood firm as they went on to record a double and go to the top of the table.

With just two wins in 13 league games and languishing at the foot of Division 2, Rasharkin turned in a very strong extra time performance in the Senior Feis cup football final to win by three.

Tied at 3-16 each at the end of normal time the St Marys side outscored the Saints, four to one, to give the club something to crow about after an outstanding scoring performance from Conor McFerran who grabbed a goal and eight points.

No one could have foreseen what was about to transpire with a little over five minutes of normal time remaining. Jack Quinn had just bagged Rasharkin’s third goal of the contest and opened up what they would have though and unassailable seven point lead. All Saint’s came roaring back however and with the Kavan Keenan penalty in the fifth minute of injury time, tied the sides to force extra time.

It was the second time during the second half that the Ballymena side clawed their way back into the game. Conor McFerran top scored for the St Mary’s men with 1-8 and his fifteenth minute goal had opened a seven point lead but a youthful All Saint’s side showed tremendous spirit and desire to remain in the final.

Rasharkin controlled the two five minute periods of extra time with Tiernan O’Boyle, Shane Hasson and two from McFerran giving their side a strong advantage as Diarmuid McNally’s fourth free out of six overall was the only response made by the Ballymena side.

With both sides showing plenty of changes from their recent league matches, the first half was a wrestle for supremacy. The Ballymena men took an early two point lead before Shane Hasson opened Rasharkin’s account with a fourth minute free.

Brendan McDonnell’s first of five points opened the two point lead once again before Gerard O’Hagan landed the opening goal of the contest in the fifteenth minute to give the men from Dreen the lead for the first time in the match.

The remainder of the half was tit for tat scoring. Shane McBride, McDonnell, Connell Lemon and McNally firing over for All Saint’s with O’Boyle, Conor McFerran, Shane and Andre Hasson all finding the target for Rasharkin giving them a one point advantage at the break, 1-6 to 0-8.

Both sides started the second half brightly but when Damien Casey scored All Saint’s first goal after six minutes, it looked like they would push on after opening a two point gap once again.

That wasn’t to be however with that goal proving their last score for ten minutes.

Meanwhile, Rasharkin rallied to score 1-7. Shane Hasson , Pearse Kelly and Gerard O’Hagan accompanying an electrifying spell from Conor McFerran. The Rasharkin man’s sixteenth minute penalty rounding off a seven minute scoring burst where he hit 1-3 out of his sides 1-7 in ten minutes.

McDonnell stopped the rot for the Ballymena side with fine scores either side of Shane Hasson’s first from play but when McFerran took his tally to 1-6 for the match in the nineteenth minute, the St Mary’s men led by seven with a little over ten minutes remaining.

All Saints substitute Emmett McAllister gave his side a brief glimmer of hope when he bagged his sides second goal only to see Jack Quinn respond in similar fashion for St Marys.

The Saints however refused to throw in the towel and points from Damien Kelly and three frees from McNally brought them to within a goal of Rasharkin with Keenan’s injury time penalty forcing extra time with the sides tied at 3-16 each.

Having apparently thrown the Feis crown away Rasharkin could have been forgiven for giving up the ghost. However they were far from a spent force landing the only two scores of the first five minutes of extra time fromO’Boyle and Conor McFerran.

The Saints retaliated in the second period with McNally’s fourth free of the final only to see Shane Hasson and Conor McFerran points deny them in an exciting contest.