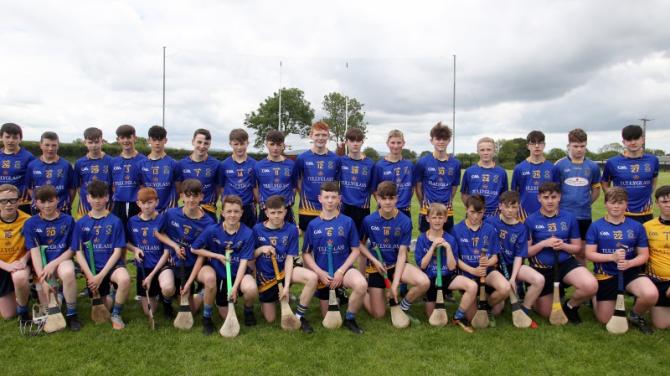 IT was a bad day at the office for St Louis as their favourites tag came back to haunt them.

At Ahoghill they were beaten into submission by a strong Maghera side who hit seven goals in the process. of retaining the Gallagher Cup.

The Ballymena boys came into the game as favourites after a runaway win over Cross and Passion Ballycastle in the semi-final.

But nobody does finals better than St Pat’s and two early Eamon Cassidy goals, a greater strength throughout the field and a stellar defensive display were the key factors.

The Maghera rearguard were simply outstanding as they held their opponents scoreless from play throughout the game.

And with Danny McDermott faultless in the sweeper role and Fionn McEldowney defying the odds at corner back the Ballymena boys simply couldn’t find a way through.

Eamon Cassidy, who had starred in his side’s semi-final victory, hit the net twice in the opening four minutes and with breeze at their backs Maghera got off the best possible start.

A free from Cassidy and two Niall Barton points from play had the Derry men in total control.

St Louis had goalkeeper Ciaran McQuillan to thank for denying Cassidy a third goal before McCollum notched two frees to get them off the mark.

With five minutes to half-time McGroarty had a shot saved by McQuillan but the ball wasn’t cleared and Jack Dunne’s goal gave Maghera a deserved 3-3 to 0-2 interval lead.

If St Louis were to get back into the game they needed a good start but it was the St Pat’s side who continued to dominate and ten minutes in a Dunne rocket to the top corner put St Patrick’s well on their way to glory.

Things went from bad to worse for the Ballymena school when a long range free from St Pat’s captain Eoin Scullion ended up in the back for the St Louis net for a fifth goal.

Cassidy completed his hat-trick with a fortunate goal when McQuillan failed to clear a high ball from Jack Dunne before full-forward Barton grabbed Maghera’s final goal of the game.

Ronan McCollum grabbed a consolation goal when he drilled a free to the top corner of the St Pat’s net, picking off all his sides scores, but the cup was Maghera bound for the second year in succession.