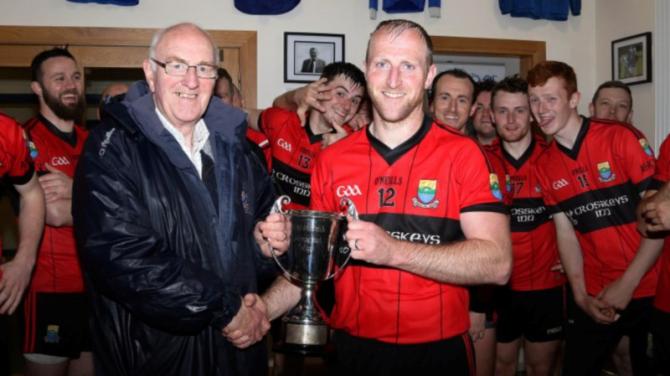 With both sides involved playing Division 2 Hurling, although the Glengormley side are much better positioned, it was an Sean 'O'Connell goal at the end of the third quarter which was eventually the difference in the sides.

Played at the Whitehill, the Ahoghill men led 0-11 to 0-8 at half time and were never headed after PJ O’Connell pointed them ahead in the twelfth minute but they were never able to shake of a determined and skilful St. Enda’s side who kept going right to the end.

Both sides exchanged early points with PJ O’Connell and Sean O’Connell on target for the Ahoghill men and St. Enda’s responding through McSteen and Darach Cooper before Sean O’Connell edged the South West side ahead with a point in the fifth minute.

St. Enda’s replied through Darach Cooper and Philip Curran to briefly take the lead but a couple from PJ. O’Connell quickly restored the Ahoghill side’s advantage. Both sides were contesting every ball in true championship spirit but the Gaels were slowly getting on top and a couple of points from Owen Neeson had them two in front by the 14th minute.

PJ’O’Connell got his name in referee Vincent Boyle’s book for an over robust body check soon after and a yellow card for his troubles but when play resumed Patrick Ross fired over for the Hightown side to close the gap to two with 17 minutes on the break.

It was end to end stuff at this stage with neither defences giving anything away softly and Pearse Downey extended the Ahoghill lead to three before St. Enda’s came back strongly with points from Eddie O’Connor and Killian Jennings to leave just one in it.

Indeed Jennings might have had a goal but fired over and in the run in to half time the Gaels stepped up a notch with Donal Graham, Ronan Graham and PJ O’Connell adding points although Killian Jennings and Paddy Ross did respond for the Hightown side.

Three ahead at the break and deserving of their lead, Cloney Gaels tried to turn the screw at the start of the second half but it was St. Enda’s who opened the scoring with a point from Darach Cooper before Martin Curran pulled off a point blank save to deny Pearse Downey what looked like a certain goal at the other end.

Ahoghill introduced Dan O’Neill for Callum Reynolds and the corner forward was soon into the action but the South West side were denied on a couple of occasions by the excellent Martin Curran in the St. Enda’s goals before he was finally beaten by a deft flick from Sean O’Connell at the end of the third quarter.

Dan O’Neill and Owen Graham added points before substitute John McBride replied with an excellent point for St. Enda’s but at this stage Ahoghill looked to have it in the bag as they led by six with six minutes of normal time remaining.

The Glengormley side were having none of it however as they hit the next three point through Philip Curran, Ruairi Donaghy and Aidan McGowan to close the gap to three and ensure an anxious finish for the eventual winners.

The Clooney side held their nerve however with their defence standing strong as St. Enda’s went looking for the goal that they needed with Owen Neeson and substitute Joe Downey weighing in with late points and Paddy Ross and Philip Curran responding with consolation points for St. Enda’s.

A game, which perhaps the Ahoghill side should have won much more comfortably but for the heroics of the St Endas goalkeeper Martin Curran who stopped everything thrown at him.