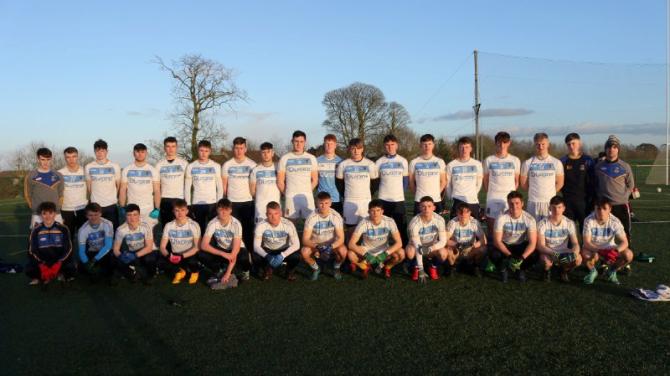 THE omens weren’t good for the McLarnon cup footballers from St Louis Ballymena as their coach broke down on the journey to Lurgan.

The game, the McLarnon Cup semi final was delayed for a period before the action eventually began.

Looking for their first success in this competition, the Ballymena school were well in the reckoning in the first half but were dealt a cruel blow in the second when the lads from Red High Downpatrick fired home two goals and the contest was over.

The Down school bridged a thirteen year gap and qualified for the Danske Bank McLarnon Cup final for the first time since 2006 with a comfortable 2-15-0-11 victory in the end.

Only three points separated the sides at the interval, the Down lads ahead 0-8 to 0-5 but St Louis showed no ill effects as a result of the disruption to their journey and gave as good as they got in the opening thirty minutes.

Those second-half goals from Brandon Boyd however was enough to shake off the gallant challenge from the Antrim school who are certainly making their mark on Colleges hurling and football.

While this was far a shoot out between Downpatricks Ruairi O’Hare and St Louis Aiden Scullion, both contributing seven points the inability of the Ballymena attack to test the Red High ‘keeper Eoin Maginn cost them big time.

The Ballymena side were first off the mark as Seann Elliott rose highest to claim possession, burst forward and confidently popped the ball over the bar.

Red High levelled through a converted Ruairi O’Hare free only to see Peter Cullen restored St Louis’ lead after riding heavy pressure and keeping his composure to slot over.

A fantastically converted 45′ by Aidan Scullion had Ballymena 0-3-0-1 ahead by the seventh minute, however the tide was about to turn in favour of the Downpatrick school.

Midfielder Peter McMullan made space and closed the gap on the thirteenth minute and midway through the half McMullan picked out middle of the field partner O’Hare.Hhis shot was parried by Daniel McNicholl but referee Mark McGeehan called play back for a free which was converted by O’Hare to level at three each.

Red High hit the front through Oran Cunningham after Ronan Conor was denied a goal chance by ‘keeper McNicholl and Tom Smyth doubled his sides advantage with a confident point.

Having gone fifteen minutes without a score Aidan Scullion converted back to back frees to level proceedings for the third time at five apiece.

Red High however were out in front at the break thanks to three successive Ruairi O’Hare scores.

Two of O’Hare’s three came from converted frees, sandwiched between a follow-up point after a frantic scramble in the St Louis’ area from Tom Savage’s shot as the Downpatrick men edged 0-8-0-5 in front at the change of ends.

A brilliant start to the second half saw Red High take a massive step towards victory in the third minute when Tom Smyth slipped in Brandon Boyd and the centre -half forward rifled past McNicholl to give them a six point lead and no way back for the Ballymena school.

While Aidan Scullion responded from his fourth placed ball of the game four more unanswered points put Downpatrick out of sight..

Tim Prenter claimed two of his sides four, with O’Hare from a free and Tom Smyth claiming the others.

Ballymena then responded with four points of their own. James McDonnell weaved his way forward and popped the ball over, then Scullion slipped whilst taking a 45′ and the ball fell to Eoghan McGrath whose over the shoulder shot split the posts.

Scullion converted back to back frees for the second time in the game and suddenly momentum appeared to be with the Antrim side who trailed 1-12-0-10 with little under a quarter of an hour remaining.

A third Tim Prenter point of the half had Red High back in the ascendancy and ten minutes from time the County Down side escaped their first real nervy moments in defence.

James McDonnell floated the ball on top of goalkeeper Eoin Maginn but Tom Smyth was on hand to mop up the danger and clear off the goal line.

O’Hare and Scullion traded further points in the aftermath, whilst Smyth stretched his sides lead to seven with his third point to make it 1-15-0-11.

The killer blow for St Louis’ arrived five minutes from time. The Antrim side were caught out at the back and paid the price as Brandon Boyd rifled past Daniel McNicholl to put ten between the sides, 2-15 to 0-11 .

A consolation goal almost came St Louis way when Peter Cullen fed attacking wing-back James McDonnell but an outstanding save from Eoin Maginn preserved his clean sheet for the evening.

The Downpatrick side saw out the remaining minutes with ease and booked their place in the Danske Bank McLarnon Cup decider for the first time since 2006.

A bonus also for the Downpatrick school means that despite the outcome of the final they will advance to the All Ireland semis as both the other semi-finalists are amalgamation sides, and, according to the rules don’t qualify.