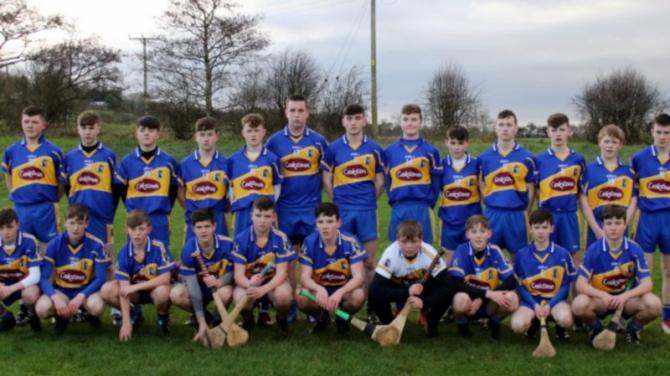 WHAT a lop sided under 21 B football championship final.

Moneyglass ruled the roost from start to finish as they blew away the Hannastown challenge to win by a handsome 19 point margin.

It was obvious from the thrown in that they were by far the better outfit and had this final all wrapped up at the start of the second quarter. By that stage their nippy corner forward Dermot McErlean had knocked home three goals and Hannastown were on the flat of their back.

From this stage on the one sided nature continued with the St Ergnats side ten ahead at the break, 3-6 to 0-5, and when Sean Kelly and Tiarnan Duffin added a couple of second half goals the demolition was complete.

The red hot favourites landed the first punch inside of two minutes when Jack McCoy linked up with Eamonn Kelly. Ronan Graham the got a slice of the action when he set up Dermot McErlean and the corner forward hit the net despite the best efforts of Gerard Smyth in the Hannastown goal.

The side from the hill rallied though as Cameron Flynn fed Declan Smyth who hit an excellent point in response.

Eoin McKeown conjured up a further fine score with a converted free from Mark Finnegan after eleven minutes tying the game at 0-3 to 1-0.

Ben Rice saw then his shot charged down but Pearse Fegan edged Hannastown ahead a couple of minutes later.

St Ergnat’s levelled the game up through a converted Conaill Prenter free just past the midway point and the Moneyglass men seized control on the game in the final quarter of the opening half.

On 16 minutes a long punt into the full forward line paid dividends once more as Dermot McErlean beat Gerard Smyth to the loose ball and rifled home from a tight angle to make it 2-1-0-4.

Sixty seconds later and St Ergnat’s found their third goal as McErlean beat Ryan Diamond to the ball and fired to the net for his third inside of seventeen minutes to make it 3-1-0-4.

Jack McCoy added a further point despite his side having a penalty appeal turned away while at the other end Pearse Fegan shot over his second point of the half after a burst from Declan Dunne.

St Ergnat’s ended the half with four successive scores to lead by double figures at the break all coming courtesy of Conaill Prenter.

The first could have been another McErlean goal but for an unselfish pass across the face of goal that Prenter turned over.

Ronan Graham’s pop to Prenter yielded a second and two further scores in injury-time from a free and play ensured his side were in firm control and 3-6-0-5 ahead at the interval.

Dermot McErlean increased his sides lead three minutes after the restart with a point after a patient and probing move.

Mark Finnegan replied with a converted free at the other end but further trouble loomed as St Ergnat’s added their fourth goal.

For the fourth time corner-forward McErlean was involved, this time in the providers role as he showed determination to chase a lost cause and played a pass across the face of goal which was fisted to the net by full-back Sean Kelly.

Finnegan replied with his third converted free but two points in less than sixty seconds from Patrick McCormick and McErlean had Moneyglass well out of sight at 4-9-0-7 with twenty minutes still to play.

Jack Summersgill then landed a marvellous point as Lamh Dhearg set about salvaging and restoring some pride though after twelve minutes St Ergnat’s widened the margins further with their fifth goal. A confident finish to the corner of the net from midfielder Tiernan Duffin put the game beyond all doubt .

Conaill Prenter who ended with an eight point tally added his sides next three scores in between a confident Ben Rice point.

Patrick McCormick and Eamonn Kelly then finished the Moneyglass’ scoring and only a smart save from Gerard Smyth prevented substitute Enda Duffin from piling on further misery on the goal front.

Ben Rice finished the evenings scoring but the Hannastown men were outclassed, a nineteen point defeat saying it all.

Two scores were all the Garron Tower lads could muster in this Leonard Cup semi final.

Both came in the opening half as they gave as good as they got but they ran out of steam in the second 30 minutes when Maghera eased to a comfortable nine point victory.

There was plenty of honest endeavour in this game at Ballymena but not too many scores as free-taker Peter McCullagh steered St Patrick’s Maghera into a final against St Mary’s CBGS Belfast in early January.

In the first half Maghera faced the wind and a very determined St Killian’s team who dominated general play, yet went in at the break two points in arrears.

A goal from Colm McKeegan was followed by a free from Pádraig McKillop, but really they could have been further ahead after twenty minutes although John V Morgan in goals was needed to rescue them as well.

The goal that beat him was a shot from Thomas McKeagney that came through a maze of players to reach the bottom corner.

Maghera therefore turned over with a two points’ lead and, with breeze in their favour, there was more intensity early in the second half.

He hit the target six times from placed balls during the second half with James Friel, their top performer on the day, taking their only score from open play at the half way point in the McCullagh show.

St Killian’s struggled for scoring efforts against the stiff breeze and can have no complaint about the result, while Maghera’s sharpness will need to improve ahead of the New Year showdown with St Mary’s.