Fancied Tir-na-nOg beaten by a point 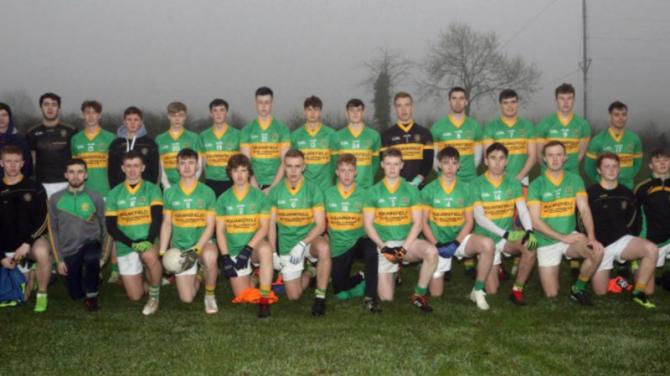 The end of the Under 21 football championship trail came to an end for Randalstown side Tir-na-nOg at Cliftonville when Rossa nudged them out by a point in this A quarter final game,

A point, two minutes into injury time sealed victory for Rossa over a Tir na nOg side who for long periods in the game appeared to be heading for a place in the semi-final .

After an unbeaten run in Group 2 where Cargin, Glenravel and Aldergrove all bit the dust to this talented Tir-na-nOg side, they were fancied to go places, and when they hit a couple of first half goals they looked well on their way.

Rossa however gathered momentum in the second half and withheld a late Tír na nÓgs come back to hold out for victory.

After 1fifteen minutes Tír na nÓg here in the driving seat having gone 2-1 to no score ahead through an Aaron McNeilly goal and a goal and point from Darragh Fegan.

Rossa pulled a couple back through Michael McGreevy and Micheal Close before disaster struck for the Whitehill team whenthey were reduced to fourteen men.

Despite this set back Ciaran O’ Neill and Darragh Fegan increased their lead to six points before Eoghan McMenanin got Rossas opening point but the momentum was very much with the South West side.

The Randalstown side pushed further ahead with three points, Darragh Fegan hitting two and Emmet Murraythe other to put them in a very favourable position at this stage.

However Rossa rallied in the closing stages, two points from Eoin McMenamin and one each from Gerard Walsh and Micheal McGreevy to trail by five at the interval.

Continuing the first half trend Tír na nÓg got the first score of the second half from Ciaran O’Neill but the tide began to turn as Rossa hit the next six scores, shared by Eoghan McMenanin, Gerard Walsh and McGreevy as they clawed their way back to trail by just three with ten minutes on the clock.

Not surprisingly went completely defensive at this stage pulling thirteen players behind the ball in an effort to close down the game and, as a result, were unable to get any forward thrust. The West Belfast side took advantage of this and Eoghan McMenanin converted another free and mid fielder Cormac Murray scored an excellent point to get much too close for comfort.

With Tír na nÓg holding on by the skin of their teeth the nail in the coffin came when Darren Grego found the back of the net to put his side two in front. McMenamin continued to inflict punishment with his sixth point of the game and with six minutes remaining they led by three.

When all hope for the Whitehill side looked lost referee Charlie Hemsworth threw them a lifeline when he pointed to the spot for an off the ball incident against substitute Stephen Carey. With normal time almost up, Ciaran O’Neill stepped up to hit the penalty but credit to Michael Byrne who got down low and saved the shot only for Ciaran Porter to sneak in at the back post and finish the rebound to again tie the game.

Extra time looked on the cards but, two minutes into injury time in their last attack, Rossa broke fast from their kick out and man of the match Eoghan McMenamin popped the ball over for the winner.

The fact that both Creggan and Portglenone had ended tied at the top of their group after the round robin stages of the Under 21 football championship suggested that this quarter final would be a close run thing. And, in the end, that is exactly how it panned out, Kickhams getting home by a couple of points. As it turned out it took a fifty seventh minute point from minor star Dominic McAteer to gave them that two point cushion which sees them advance to a semi final shoot out against St Brigids who accounted for St Johns.

Conditions were certainly far from ideal as rain arrived on the Staffordstown Road arena to replace the heavy mist which had drifted away as the sides prepared for battle, a battle full of thrills and spills and plenty of entertaining fare.

Creggan started the better and by the tenth minute they had added a trio of points as the Bannsider’s found the posts an elusive target.

Conor Small lead the way in the second minute from a ;long range free followed by a couple from Jamie McCann which sent out a strong message that they meant business. McCann first came from a free with an immediate response from play following a weak kick out.

It took Casements twelve minutes to get off the mark and after a couple of aborted attempts Oisin Doherty sent Ciaran Lynch in to get them away.

This settled them nicely and when they followed with a goal this game suddenly took a different complexion. Fergal O’Kane was the creator and finisher darting through the Kickha

After turning in a couple of poor performances in the qualifiers, All Saints travelled to Crumlin leisure centre on Saturday to face a Glenavy side who had suffered a similar fate in their qualifying games and neither knowing just quite what to expect in the U21B quarter-final.

Both sides were short a number of players but it was the Ballymena side who made the better start with Matthew Downey stealing forward from defence to fire to the net in the second minute and it was a lead they were never to relinquish.

Brendan McDonnell added a 4th minute point and Conor O’Rawe followed with another before Eoin Campbell got in for goal number two to put the Slemish Park side in control with only seven minutes on the clock.

Glenavy were handed the opportunity to get themselves off the mark when Anthony McAvoy conceded a penalty but were wide of the mark from the award and it was All Saints who responded with points from Brendan McDonnell, Shea O’Brien and youngster Conor O’Rawe to extend their lead.

Glenavy finally opened their account with a point in the 14th minute but a minute later they were struck another killer blow as Brendan McDonnell raced through for the Ballymena men’s third goal of the half.

All Saints were in control in nearly e very sector of the field as the excellent McDonnell added a point and his brother James followed with another. Brendan McDonnell, Kieran O’Boyle added points and then Emmet McAllister denied Glenavy from the penalty spot in the 27th minute and it was clear it wasn’t going to be St. Joseph’s day.Niall Shannon and Brendan McDonnell completed the first half scoring with late points to leave Peter McCann’s side leading 3-11 to 0-1 at the break and even at this stage it was as good as over. There was to be no respite for the Chapel Hill side as play resumed as Conor O’Rawe pointed and Shea O’Brien followed with their fourth goal and with McDonnell and O’Brien in fine form the scores continued to flow.

Glenavy did enjoy a bit of success during the second period adding 1-2 of their own but further goals from Eoin Campbell, James McDonnell and Kieran O’Boyle ensured that it is the Ballymena side who will take their place in the U21B semi-final.

St Brigid’s booked their place in the semi-final of the Under 21 Championship when they easily accounted for St John’s in Sunday’s quarter final at Coláiste Feirste. Having beaten Sunday’s rivals by fourteen points in the group stages of the competition few were expecting any change this time around and when the South Belfast side went 1-2 to 0-0 ahead after ten minutes the predictions looked correct. However when St John’s awoke from their slumber to take the lead with two quick goals we seemed to have a game on our hands until two red cards for St John’s inside thirty seconds on the cusp of half-time ended the game as a contest.

Corner forward Peter Webb gave St Brigid’s the lead with a point from a free in the opening minute and when Oran Boyle got in for the opening goal a minute later they were in control. A John Blaney point in the third minute put St Brigid’s five clear and the predicted procession appeared to be developing but a brilliant individual goal by full forward Peter McCallin which saw him weave his way in along the end-line before firing low to the net suddenly sparked a reaction from the Corrigan Park side.

When midfielder Sean Wilson fired in another excellent goal soon afterwards the Johnnies were suddenly ahead, though it was to be short lived as a goal from centre forward James Smith in the sixteenth minute gave St Bride’s the lead again. Still it was now more competitive and after peter King and Peter McCallin exchanged points there was only a goal between them.

Full forward Peter Henvey doubled the St Brigid’s lead with his side’s third goal in the 22nd minute and they held that advantage to just before the break when the bottom fell out of St John’s challenge. It all came about when St Brigid’s were awarded a point which the St John’s players were adamant was wide of the target and unfortunately two of them protested just too much and ended up getting red cards. With just 13 men for the second half it was understandable that St John’s were on a hiding to nothing and when St Brigid’s got their third goal through Peter Webb three minutes after the restart the game was gone from them. To their credit they kept battling away against the odds and restricted St Brigid’s to four pints over the next twenty minutes, while scoring three of their own, two really superb efforts from midfielder Sean Wilson.