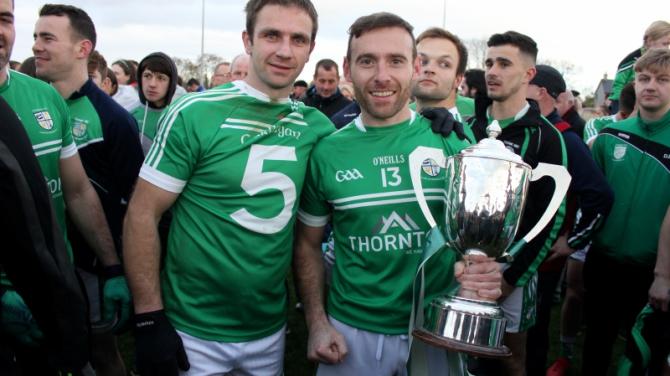 THIS unique Antrim senior football championship final will perhaps, in years to come be remembered for the score line and not the fact that Cargin were picking up an eighth title or that Creggan were making their first appearance in a championship final for forty one years.

And perhaps the fact that only nine points were scored in what should have been an epic encounter is not surprising.

The teams live in each others pockets, they are constantly in battle and the fact that the managers Damien Cassidy and Kevin Madden who, in the past, have worked together and know each others thinking inside out, all suggested that this would be a defensive game.

That is exactly what it turned out with two well drilled defences contain, with great effect, some of the most talented forwards in the County.

And, in the end it took a late Michael McCann point to win the game for Cargin, a game it must be said which could have gone in either direction.

With the early rain gone and a stiff northerly breeze sweeping across the Ahoghill pitch the scene was set for this history making all South West Senior football championship.

While Cargin started odds on favourites Creggan were not there to make up the numbers and under Kevin Madden they were well equipped to upset the odds.

Cargin opened with an early score as Gerard Mc Cann seized the opening throw-in, and after the ballr passed through the hands of Michael Mc Cann, Jamie Gribbin and John Carron full forward Michael Magill delivered a stylish finish.

A superb opening score which hinted at better to come but scores failed to materialise as this become a war of attrition in which the fear of losing rather than the pursuit of victory seemed upper most in the minds of both teams..

The Kickham’s drew alongside their opponents in the eleventh minute when Liam Quinn’s on the wing earned a free which Kevin Small converted to tie things up at one apiece as Creggan were forced into an early change.

Martin Johnston was called on the replace Matthew Rodgers and was soon to be involved as he sent Liam Quinn scampering away on the left hand side. Quinn was halted in stride allowing Kevin Small to put his side ahead.

Back came the Toome men when a James Laverty clearance and a Tony Scullion delivery sent Ciaran Bradley away on the right hand side to send knock over a fine point and sew the game up once more.

The remainder of the opening period failed to produce another score as both missed opportunity, notably Cargins net minder John McNabb just wide from a long range free whilst Kevin Small missed an injury time free to send the sides in on two apiece .

McCann however did produce a moment of magic when he pointed from an acute angle out on the right after Jamie Gribbin had found him with a neat pass.

Nineteen year old Gribbin in his first senior year continues to impress in his work rate and vision and together with 19 year old Ciaran Bradley look young men with futures in the green and white.

Bradley made it 0-4 to 0-2 when he claimed a James Laverty clearance to make ground on the right hand side before finding the target after nine minutes and for a spell It appeared that the favourites might be about to pull out of sight.

Back came Creggan, without a score for over twenty minutes, when Marty Johnston, obliged in the twelfth minute and then saw Conor McCann add a fisted effort to tie matters at four each.

An intense energy sapping contest was making its toll on the participants however and several changes were required in both camps as the game entered the final quarter.

The next score would most likely prove vital and indeed some had thoughts on a replay as the clock ticked down, but cometh the hour, cometh the man and man of the match Michael McCann retained both his cool and his accuracy to score a fifty first minute winning point.

Ciaran Bradley, Kevin McShane and Jamie Gribbin had all been involved in the left sided approach before the ball was delivered to the team captain, and though he was closed down by the Creggan defence, a little burst of pace created the opening to deliver the winner.

The last phase saw Cargin shut up shop as they ran the clock down although Creggandid have a late opportunity to earn a replay but a late, injury time Kevin Small left sided long range free sailed just wide of the uprights.

There was a further chance deep in injury time when Creggan were awarded another far out free but instead of having a go, or dropping the ball into the square they decided to go short and eventually lost possession and the championship.