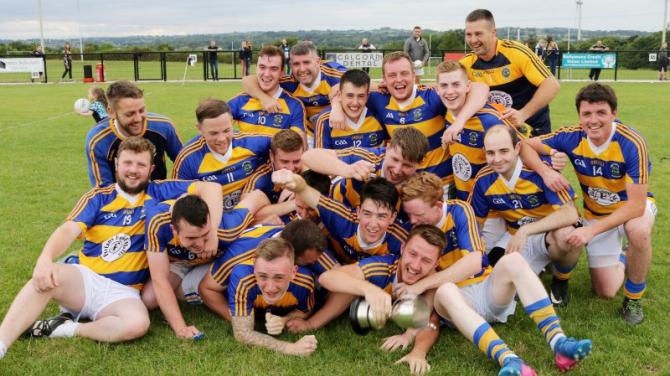 Rasharkin 1-17 Con Magee’s Glenravel 1-16: After a nail biting hours football at the Glens Feis in Ballymena, Rasharkin, with a late point won the day with a mighty victory against old rival Glenravel in the junior Feis Cup final.

A point from Johnny McAleese in the final minute of this fine game did the trick preventing a period of extra time being required.

The long serving St Marys man got on the end of a dropping ball and despite the efforts of two defenders managed to screw it over the bar from close range.

It was Glenravel who looked to be heading for victory and retention of the trophy when they led their rivals by 1-11 to 1-5 at the halfway stage. When they lost wind advantage and had full back Sean Lee red carded on the restart, it became something of an uphill battle for the Glensmen.

At the end of the third quarter the Dreen side had clawed back the Glenravel advantage and tied the scores at 1-11 each only to see the Con Magees side make another bid for glory.

The Con Magee’s started this Feis Junior football final with a fairly crisp breeze at their backs and enjoyed much the better of the opening exchanges as they raced into a 0-4 to 0-1 lead after 11 minutes with their scores coming from Neil McCann, Conor Carey, Sean McIlroy and Michael McQuillan and Rasharkin’s opening point from Brian Og O’Neill.

Rasharkin began to get a foothold in the game however as Gerard O’Hagan got their second point but Declan Traynor, who was to prove a massive influence for the Con Magee’s throughout restored their four point advantage.

Things took a dramatic turn when a goal from Brian O’Neill from the penalty spot brought the sides level after 13 minutes and when Johnny McAleese added a point St. Mary’s looked like they were gaining control.

However Neil McCann tied the scores once more before Sean McIlroy raced clear for a Con Magee’s goal in the 18th minute to put his side three in front. Johnny McAleese and Declan Traynor exchanged points and Pearce Kelly closed the gap to two with a point in the 25th minute.

It was the Glensmen who finished the half strongly however as Neil McCann, Mick McQuillan, Declan Traynor and Callum Mullan struck unanswered points to leave them in a strong position at the half way stage, 1-11 to 1-5 ahead.

The new half was in its infancy when Andrew Hasson pointed for Rasharkin and when Sean Lee Kerr was shown a straight Red by referee, Malachy McToal the tide looked to have turned against the Feis Cup holders.

Killian Darragh, Brian Og O’Neill, Andrew Hasson and Aidan McMullan added points for St. Mary’s before Johnny McAleese tied matters after 45 minutes and at this stage the momentum was very much with the Rasharkin men.

A couple of excellent points from Declan Traynor, one following a 40 yard solo run and the other a sublime long range effort had the green & whites ahead by the minimum with 12 minutes remaining as Rasharkin introduced Ryan Lynch for Gerard O’Hagan.

Traynor, who’s pace and accuracy continued to trouble the opposition extended the Glenravel lead to two before Aidan McMullan pulled one back for the Dreen side. It was end to end stuff at this stage of the game with no quarter asked or given and the crowd very much on their toes.

A couple more from the excellent Traynor in reply to one from Andrew Hasson saw the Con Magee’s in what looked like a commanding position as they led by two with three minutes of normal time remaining.

However Rasharkin produced a storming finish to break the hearts of a brave Glenravel side with Andrew Hasson, Ryan Lynch and Johnny McAleese getting the scores to edge them over the finishing line to take the trophy.

Moneyglass 5-15 Gortnamona 2-6: Moneyglass remain in touch with the goings on at the top of the table and consolidate their second place berth in the All County Minor Football League Division 2 when the proved too strong for the visiting Gortnamona.

The St Ergnat’s boys did take a time to get it together and indeed the city visitors made the better start to proceedings and a ninth minute goal sent to the back of the net by their hard working mid-fielder Tim Scannell saw them secure early advantage.

Both had squandered early openings secured in turn but after Gary Murray opened account for the home side with a sixth minute point the visitors were quick to return fire when Ciaran Scullion sent his mid-fielder in to shake the net with a crisp finish and Caomhinn Beck followed with a point.

The home side drew abreast at the end of the opening quarter when Jack Mc Coy was impeded inside the square and Gavin Murray stroked the resultant penalty home with McCoy adding a second goal a few minutes later.

A subtle Ben Hamill delivery, after full back Dermot Scullen made a fine interception, sent the wily corner forward in for his side’s second goal and although Aiden Dempster raised a white flag in reply at the other end shortly afterwards, Tyler Cassidy’s eighteenth minute strike saw Moneyglass at 2-2 to 1-2 to the good.

The opening period had continued close and although the home side retained advantage the Gorts were still in contention, but after JJ Quinn struck a fine point,six minutes from the break, following a similar Ben Hamill score at the other end, the visitors were to be reduced to fourteen men.

Jack Mc Coy had the final say on the scoreboard in the last minute his point sending the home side in 2-4 to 1-3 in front.

St Ergnats started the second period on the positive and when Jack Mc Coy (2), Peter Mc Cormick, and Gary Murray raised white flags they had sprinted into an eight point lead.

Back came the Turf Lodge side, Caomhinn Beck firing home after twelve minutes and they were given a glimmer of hope.

The centre forward added back to back points in the previous few minutes and ensured only four points separated the sides at 2-9 to 2-5.

Moneyglass were certainly being asked questions at this stage but they came back strong when Fiontan and Gavin Murray combined to send Enda Duffin in for a goal and when the nimble Jack Mc Coy followed with a couple of points the home side were back in business.

St Ergnats the remainder of the game and points from Michael Martin and Gary Murray preceded an eye catching fifty second minute Aiden Mc Erlean goal, when the corner forward’s cheeky lob finished in the corner of the net, and the end was in sight.

Gort na Mona’s best player Caomhinn Beck did add a point six minutes from time only to see Moneyglass finish in style. Tyler Cassidyfired over a couple of points and a Michael Martin goal saw them emerge eighteen point winners.

The Cúchulainn’s side was stronger in most areas of the park, with Eimhear McMullan pulling the defence together very well, Katie Laverty and the excellent Caoimhe Molloy on top in midfield and Áine Magill the pick of a forward line that had plenty of possession over the hour.

Glenravel were off colour in this outing, their first defeat of the season. Only goalie, Orla Donnelly and defenders Jaime Woulahan and Maria McKenna played anywhere near their best while their forward line was starved of possession for most of the game

Feis Under 16 B Hurling Final

Glenarm 5-18 Glenravel 3-4: Goals were the order of the day in this Under 16 B hurling final at the Gllens Feis staged at Slemish Park Ballymena.

Playing with wind advantage in the opening half the Glenarm boys were unstoppable and when they went in at half time with a 3-13 to 0-2 lead it was clear there was no way back for the Glenravel side.

To their credit the Con Magees did perform a lot better in the second half, and three goals gave the scoreboard a better look, but Glenarm were winners all the way and full deserved their title.