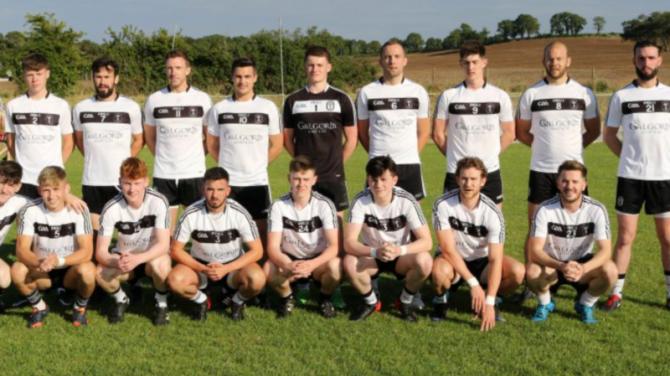 All Saints 3-18 Rasharkin 1-7: All Saints continue their slow but steady climb up the Division 2 football league table with two wins last week.

Midweek they took out Davitts away with this home victory against Rasharkin moving them to ninth spot ahead of Sarsfields, St Pauls and O’Donnels and just a point behind Rasharkin.

A depleted Rasharkin side were never in the hunt and when they lost Conor McKeever to a straight red after twenty minutes there was only going to be one winner.

It was the visitors who made a promising start however and after Eoin Campbell pointed All Saints ahead, Brian Og O’Neill got in for a third minute goal. Another exchange of scores followed Campbell and Andrew Hasson in the picture but that was as good as it got for the visitors.

A strong run from Ciaran McGarry from deep in defence set up Paddy McAleer and the County player finished low to Ryan Doherty’s right to give his side a lead they were never to lose.

Points from Eoin Campbell and Benny McDonnell put them further ahead before Eamon McNeill replied with a Rasharkin point to leave just two between the sides at the start of the second quarter.

Michael McCarry increased that lead to three before McKeever’s rush of blood saw his side reduced to fourteen men giving the All Saints all the space they needed to take the points.

Paddy McAleer and Eamon McNeill exchanged further points before a good move by the Slemish Park side saw Shane McBride steal in for a second goal with furteher points from Ciaran McLarnon and Michael McCarry moving them seven in front as the game hit the half way mark.

Enda McFerran and Michael McCarry traded points and although Benny McDonnell had a goal disallowed they finished strong with Michael McCarry and Paddy McAleer appoints sending them in 2-11 to 1-5 ahead.

It was more of the same after the break as the superb McAleer soloed through for a point in the opening minute and at this stage Rasharkin introduced Cathal Mooney for Tomas Doherty and Enda Kennedy for Pearse Kelly in an effort to resurrect their fortunes.

It seemed to stem the tide for a time and fifteen minutes elapsed before Michael McCarry pointed from a free and Eoin Campbell added another from play and a further four minutes before Eamon McNeill opened the visitors second half account.

It failed to lift the men from Dreen however and direct from the kick-out the ball was moved down field and the lively Eoin Campbell finished to the Rasharkin net to end finish the game as a contest.

All Saints emptied their bench at this stage as we saw Emmet McAllister replace Niall Shannon in goals and the return to action of Rory McVeigh who was making his return after being out for more than a year with a career threatening injury.

McCarry pointed another three frees as quite a number of Rasharkin efforts sailed wide of the uprights but the visitors were handed an opportunity to put a better look on the scoreline when they were awarded a penalty with time almost up.

Up stepped Eamon McNeill but Emmet McAllister dived to his left to make an excellent save at the expense of a point. Michael McCarry concluded the scoring with his ninth point of the game as the Slemish Park side secured a couple of badly needed points to move out of the relegation zone.

Gort na Móna 0-9 Tir na nÓg 3-13: Tir na nÓg got themselves back into contention for promotion from Division 2 when they travelled to Turf Lodge on Wednesday evening and beat Gort na Móna by thirteen points, a result which drops the Belfast men to third in the table, after sitting joint top going into the game.

For most of the opening half the Gorts matched their visitors and when Shane Scullion pointed in the twenty third minute they held a one point lead. However the Randalstown men finished the half strongly with two points from play and a goal from a penalty putting them five points clear at the break.

They grabbed their third goal early in the second half there was no way back for Gort na Móna.

Patrick McCaffrey had the home side ahead inside thirty seconds with a point from lay and though Darragh Fagan levelled for Tir na nÓg a Brendan Burns point had the Gorts back in front.

Slowly but surely Tir na nÓg began to find their feet and when Malachy Duffin was put through on goal in the ninth minute Gort na Mona goalkeeper Thomas McCaffrey was forced to ‘take one for the team’ and pulled Duffin down in the square.

Sean Redmond stepped up and sent the resultant penalty to the net to put Randalstown two points clear but the Belfast side came back strongly and three quick points from Dermot McVeigh, Patrick McCaffrey and Shane Scullion put them back on top.

Scullion’s second point on 23 minutes kept the home side a point ahead but two Darragh Fagan points and a well taken goal in first half injury time by full forward Kevin Sheerin gave the men from Whitehill a five point lead at the break, 2-5 to 0-6.

A strong run through the middle by Gorts full-back Christopher Devlin early in the second half set up Padraig McHugh for a point but just minutes later Tir na nOg took a firm grip on the game when right half back Darren McCormick combined well with corner forward Fagan before blasting home his team’s third goal from close range.

Barry McCormick and Sean Redmond added two more points for the visitors soon afterwards and though Dermot McVeigh and Padraig McHugh came back with points for Gort na Móna in the forty ninth and fifty first minutes, that was to be their last scores of the game.

Randalstown took complete control of the game from this stage on and hit six points without reply in the final quarter with Caoimhin Duffin on the end of two and one each from Kevin Sheerin, Barry McCormick, Aodhan Toland and Darragh Fagan to run out easy winners by a thirteen point margin.

And the Tir-na nOg sides good fortune continue when they tackled St Pauls on Friday evening.

Without the services of the Duffin brothers they collected a couple more points winning 0-13 to 1-7 and are now comfortably placed alongside Dunloy in joint fourth spot.