All Saints get the ball rolling 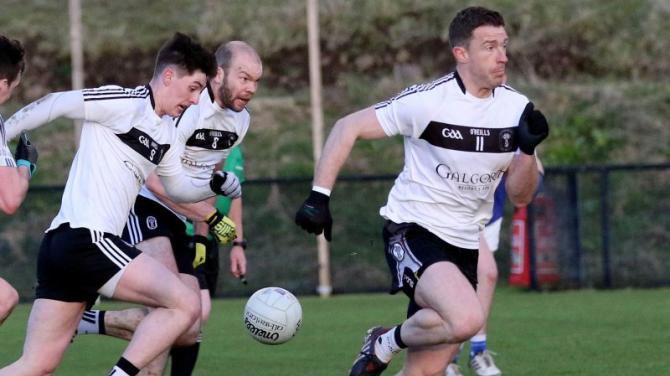 ALL Saints finally got their Division 2 football show on the road after a series of defeats which left they holding up the league table.

Five defeats on the trot is no way to begin a campaign and from here on in it is going to be a great struggle to survive.

A bright spot appeared on the horizon when they took out O’Donnels in their round six game but they are still miles behind Gortnamona, Moneyglass and Aldergrove who head the table.

The Ballymena men started brightly hitting two early scores through Patrick McAleer and Michael McCarry before the Belfast side levelled matters. Youngster James McDonnell put the visitors ahead again with a brilliant shot from twenty yards finding the top corner of the net to put Saints back in control.

This was soon followed by a goal from fellow minor Shea O’Brien as he finished from close range and the South West side were back in business. Sean McVeigh and Patrick McAleer were starting to dominate midfield at this stage and this gave All Saints the platform to open up a five point half time lead despite conceding a sloppy goal before the break.

An early point from Michael McCarry set the tone for the second half as the All Saints side kicked on and put the game to bed with County star Patrick McAleer also chipping in with a few points. Saints limited their hosts to two points in the second half and sealed the win late on when James McDonnell scored his second goal of the game.

A very important win for All Saints with Antrim county players, Paddy McAleer and Michael McCarry recording an impressive 14 points between them and their pace and movement proved too much for the home side .

Connell Lemon, playing his last game before leaving for Boston for the summer, went through a power of work for the visitors with Sean McVeigh also prominent. Youngster James McDonnell also deserves credit as he hit two great goals to keep up his recent good form and this victory should finally ignite a very disappointing season to date and inspire them to greater success in the coming weeks.

This win moves All Saints above Sarsfield’s on score difference and with an away game against St. Brigid’s followed by home games against St. Paul’s and Sarsfield’s to come in their next three fixtures they will face much tougher tests than that experienced in this one.

O’Cahan Cup specialists Cargin had to rely on late goals in the 55th and 56th minutes to secure their final slot in this South West senior football Championship semi final.

Paul Mc Cann and Michael Magill delivered the goods which proved the turning point against a well organised Casement’s outfit.

The Bannsider’s with the ever accurate Ronan Kelly leading the charge threatened a major upset when they led 0-8 to 0-7 and indeed the gap could well have been wider if Paddy Kelly had found the target from a nineteenth minute penalty award.

Casement’s utilising the quick break and direct approach to the optimum from the outset continued to remain in contact through much of the second half and when net-minder Brian Mc Manus turned Tomas Mc Cann’s fifty second minute spot kick away with the scores level a place in the decider looked up for grabs.

The Toome men were to finish with a flourish however and after Michael Mc Cann raised a 54th minute white flag to see his side move ahead his sibling Paul raced through the middle to collect from Jamie Gribbin and despatch to the back of the net Cargin had gone four points clear and were not for catching.

Michael Magill added a second major within a minute and a late Jamie Gribbin point ensured a rather flattering eight point winning margin for the holders.

Tony Scullion got the Champions away with a third minute point and when Michael McCann added a second a minute later Cargins favouritism looked well justified.

Casement’s were off the mark in the sixth minute when Ronan Kelly fired over from an acute angle only to see Jamie Gribben grab another for the champions. Paddy Kelly pointed from a Casements “45” and there was only a point in it after ten minutes.

Cargin moved a couple ahead again directly from the kick out but when Ronan Kelly shot three great scores acasements were ahead by one, 0-5 to 0-4.

Cargin drew level when Tomas Mc Cann split the posts again in the 19th minute after his brother Michael sent him away on target but in a continuing trend of end to end, tit for tat activity back came the Portglenone men and when Niall Mc Keever went down in the ‘box’ the man in the middle was quick to point to the spot awarding a penalty.

Paddy Kelly’s assumed responsibility for the kick but without reward as his effort went just wide of the posts and as play returned to the other end a foul on the hard grafting Paul Mc Cann opened the way for brother Tomas to split the posts from a thirty five metre award.

The Ports, shaking off that penalty miss were soon at it again with another Ronan Kelly point again putting the sides level at six each with just five minutes of the half remaining.

Casements continued to press with both Ronan Kelly and Paddy Kelly rewarded with fine points for a two point advantage as Caegin added to their long injury list of Kevin O’Boyle, Justin Crozier and Donnagh McKeever was added to when Tony Scullion was forced from the action with a leg injury.

Cargin did have the last score of the period when Tomas Mc Cann was illegally impeded in his passage towards the posts in the thirtieth minute and promptly knocked the free over the bar to trail by just one at the break, 0-7 to 0-8.

The Champions were fastest out of the blocks on the restart with Tomas McCann converting another free but there was no containing an eager Portglenone side and soon they were back in business.

However Ronan Kellys point was followed by another burst of Cargin fire which saw when McCann dispatched another free on target with his brother Michael increasing their lead to two with a point made by Jamie Gribbin and David Johnson.

Yet again the champions were to be reeled in with Ronan Kelly and Conal Delargy levelling the game and Cargin forced into another change when Gerard McCann was black carded, Brendan Laverty his replacement.

A Tomas Mc Cann point at the end of the third quarter saw the champions again up and running and when Jamie Gribbin won a penalty their time looked to have finally come. McCann’s effort from the spot kick however was brilliantly stopped by Brian McManus and the chance which could have sealed it looked to have gone.

Damien Cassidy charges were not going to roll over easily and shortly after the miss Jamie Gribbin and Tomas McCann set up Paul McCann who found the net and they were very much back in business.

Four in front at this stage things got even better for the champs when ‘rookie’ Jamie Gribbin seized the resultant kick out to transfer to Michael Mc Cann and on to Michael Magill who promptly sealed it with another goal..

Now with seven points to spare, there was no way back for a battling Portglenone and when Gribbin slotted over an injury time point the Cargin were in yet another O’Cahan Cup decider. Certainly it wasn’t as easy as their eight point winning margin would suggest but was a useful test for league and championship games which lie ahead.