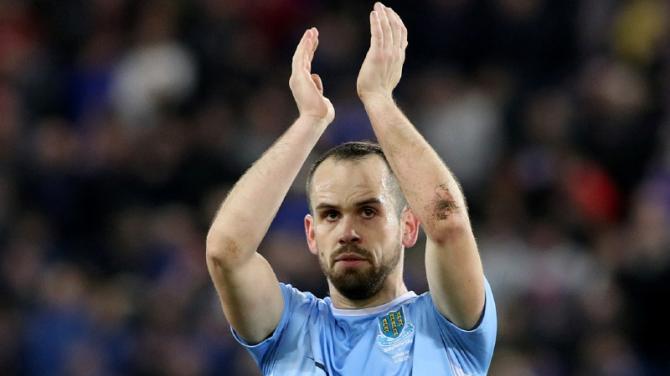 FOUR-year-old Emira Kane will put her birthday party plans on hold on Saturday afternoon - until her dad’s Testimonial match with Cliftonville is over!

Emira and her big brother Bradain will be at the Showgrounds with mum Ashleen this weekend to enjoy the occasion as ex-Sky Blue player Tony’s time at Ballymena United is recognised against the Reds (3pm).

Ballymena United made a special presentation to him after clocking up his 350th appearance for the club.

With such sterling service during the decade TK will be a most worthy recipient of the prestigious Testimonial.

Young daughter Emira will agree - but she will be equally delighted to get back into party mode - she will be 4 on Saturday - once the official football business has been kicked into touch!

Speaking to Guardian Sport this week long-serving Kane said he is really looking forward to coming back to the Showgrounds.

“I have been back one or two times since I left to watch games. I always keep a close eye on United. I had a good relationships with the players, fans and staff. I have some very good friends there, really, really good,” he said.

“I spent 10 years at Ballymena - a lifetime. There were some bad times and some good times, with the good far outweighing the bad.”

The defender/ midfielder is currently playing for Championship side Dundela.

And in typical Kane fashion he is counting down the days to new season kicks-off!

He pointed out The Duns have enjoyed a number of good pre-season results, including beating Portadown 3-0 and drawing 1-1 with Glentoran.

“I am enjoying my football. It was great to get back to pre-season training and working on getting the fitness up,” he said.

Kane had a relatively injury free time during his time with United.

“You could count on two or three fingers how many times I missed games through injury. Suspension, or just not being selected, cut my appearances down,” he said.

He recalled the League Cup victory with United in 2017, beating Carrick Rangers 2-0 at Seaview.

That season he netted a staggering 21 goals, over a dozen of these from the penalty spot.

“I think I was the first United midfielder ever to score such a tally,” he said.

Kane hopes there is a good turnout for his Testimonial match against his former side Cliftonville.

His wife Ashleen and children Bradain and Emira will be watching proudly from the sidelines as husband and dad Tony walks out of the tunnel on to the Showgrounds pitch this Saturday afternoon.

It was Roy Walker who first signed Kane back in June 2011.

When Walker left Glenn Ferguson took over and Kane continued to be part of his plans.

Next in charge, David Jeffrey, was Kane’s third boss at United.

“I enjoyed playing under all three,” recalled Belfast man Kane. “I made many friends during my decade at United, on and off the field. It was sad when it was my time to leave, but all good things come to an end.”

The former Blackburn Rovers Youth player was part of the squad that won the Premier Academy League in 2004–05.

He then became a regular member of the Rovers Reserve team before signing a two-year contract in 2006.

In November that year he had a brief loan spell at Stockport County before joining Cercle Brugge on another loan deal in January 2007.

In February 2009, Kane signed a loan deal which took him to Carlisle United until the end of the season.

In February 2011, having been released by Carlisle United, he signed for Cliftonville,

Following an impressive pre-season, he joined Ballymena United in July 2011 and made his debut against Lisburn Distillery in August 2011 but was sent-off late in the game.

During his time at United he scored 50 goals and became the club's all time record appearance holder in Irish Cup matches.

After a decade of service with Ballymena there was talk of a Testimonial game but Covid put paid to any such plans.

But this weekend all will be sorted - and the Testimonial is on!

United boss David Jeffrey recalled that at first he was not certain of Kane’s best position.

“But clearly it was in the middle of the park. A fearless warrior who always gave his best, someone who was a fantastic club man, and you really had to work with him to appreciate the level of his desire to serve this club,” outlined the Ballymena manager.

“An outstanding footballer, an outstanding gentleman of immense integrity and character and again Bryan McLoughlin (assistant manager) and I wish him all the very best in the next stage of his playing career.”

* Testimonial admission is £10 for adults, £5 concession. Pay at the gate.