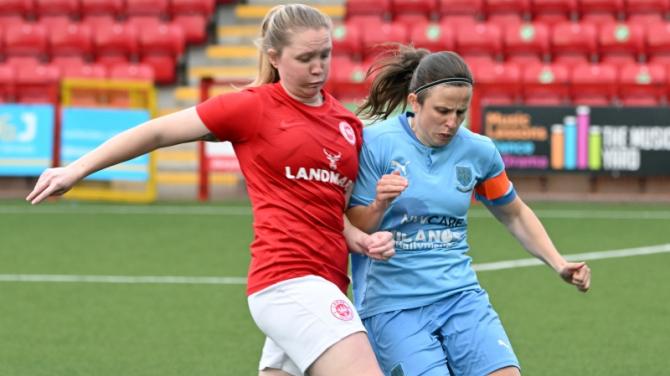 With the added intensity that comes with the Shane’s Hill derby, Ballymena were on the front foot immediately, winning two corners in quick succession.

The first was easily cleared by Larne at the front post, leading to the second when a beautifully delivered Rachel Fulton ball was powered home by Chelsea Millar, giving the Sky Blues the lead inside two minutes.

United had a number of chances to extend their lead, with Beth Hunter hitting the bar and Hannah Firth being denied by the Larne keeper at point-blank range.

Ballymena captain Firth wouldn’t be denied for long though and with half-time approaching, she doubled the lead following good work from Zoe Kilpatrick. Kilpatrick’s run down the right and excellently weighted cross was met by Firth attacking the back post and finding the net.

United’s defence was solid, particularly in catching the hosts offside, limiting them to only a few shots from distance in the first 45 minutes and taking a 2-0 lead into the break.

It was Larne who started the second half the quicker, taking advantage of a loose ball in the middle of the park to cut the deficit in half.

Ballymena restored their two goal cushion within 10 minutes, however, when Chelsea Millar turned provider, sending an exquisite ball from the back to the feet of Megan Henry who drove at the keeper, beating her with a low shot.

United kept up the pressure, their determination to hurry their opponents and press high up the park paying off when a fourth goal effectively killed off the contest.

Olivia Brown showed great strength to win the ball in the midfield, playing in Hannah Firth, whose speed troubled Larne all evening.

The skipper sent a lovely ball across the face of goal for Megan Henry to get her second and United’s fourth.Larne scored a second in the final minute of the game, but the evening – and the spot in the final – belonged to the Sky Blues.

Head Coach Will Devine said: “The semi-final was a real test of character, having had a few weeks off due to the Women’s Euros and facing an excellent Larne team who have been playing with real confidence and momentum.

“It was really important to get out of the blocks quickly and impose ourselves on the game, and it was fantastic to see the players do just that. Everyone put in a great shift, chasing every ball, being absolutely relentless in their determination to win every tackle, to take our chances and take the game away from Larne.

“We’ll take the same hunger and intensity in the final – but for now it’s back to the league campaign and doing everything we can to win promotion to the Premiership.”

Captain and goal-scorer Hannah Firth commented after the game:

“It was a really tough, hard-fought match but we were determined from the first whistle to the last and we are absolutely delighted to have made the League Cup final.

“We’ve been playing well this season but matches like these is where it really matters. The work-rate and performance from every player was outstanding and we’ll be working to build on that for the last games of the Championship season, making sure we are in the best place we can for the final. It’s time the cup came home to Ballymena!”

The Sky Blues will face St. James’ Swifts in the final. The details are to still to be confirmed but it is expected to take place in early September.