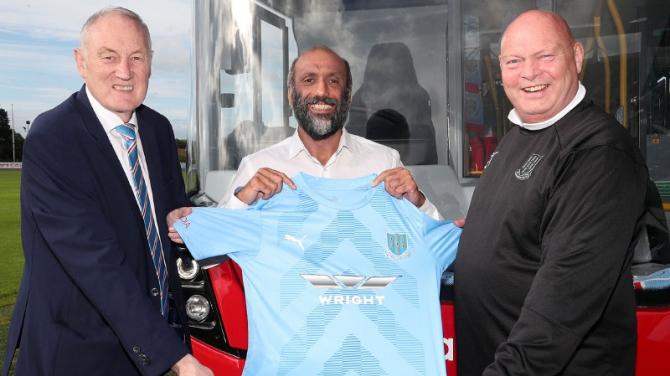 Wrightbus - a leader in zero-emission technology, including the creation of the world's first hydrogen double deck bus and the world's most efficient battery-electric double-deck bus - says the deal includes a 'commitment to work with the club on a range of community and charitable projects'

The bus was filled with the Wrightbus-branded jerseys to present to the team.

Managed by David Jeffrey, Ballymena United competes in the NIFL Premiership and plays its home matches at the Ballymena Showgrounds.

Neil Collins, Managing Director of Wrightbus, said: "It's wonderful for Wrightbus to be able to announce this exciting partnership with our local club, Ballymena United as main sponsors for the next two football seasons.

We feel immensely proud that the buses we are manufacturing in Ballymena are helping to lead the way globally, we've had a phenomenal couple of years and that success would not have been possible without the fantastic support we've had from our local community. In that context, we felt it extremely important to offer our support to Ballymena United. We wish the club every success for the coming season and beyond."

Confirming the news that Wrightbus have agreed to become the main sponsor of Ballymena United, John Taggart, Club Chairman, said all at the club are "absolutely delighted".

He said: "Ballymena United plays a key role within the local community and Wrightbus is very much an important part of our local community. Wrightbus is a company at the leading edge of bus manufacture - a market leader based here in our town, Ballymena.

In recent years the town of Ballymena has taken a number of hard knocks with the loss of multinationals leaving many locals out of work. Wrightbus, through a growing orderbook, are now providing job opportunities for local residents and that can only be beneficial to our community.

We are delighted that Wrightbus has agreed to be Ballymena United's main sponsor and we look forward to building a strong relationship between the club and our main sponsor in the years ahead."