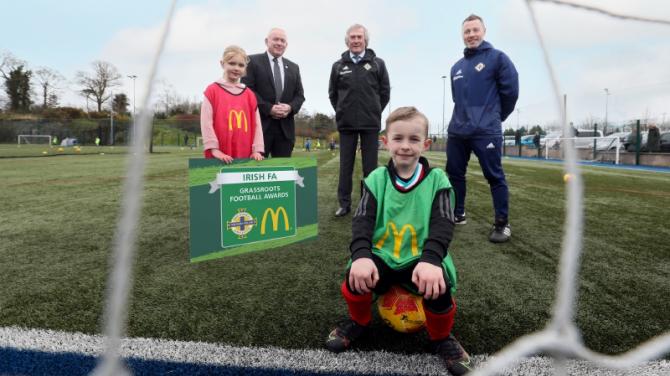 THE annual McDonald’s Irish FA Grassroots Football Awards, which celebrate 22 years in Northern Ireland this year, recognise the incredible work and commitment of football clubs and volunteers who give up their time and make a long-lasting impact on young people and communities across Northern Ireland.

Nominations for the McDonald’s Irish FA Grassroots Football Awards are still open and will close this Thursday, June 30.

Regional award winners will be announced throughout August.

The official awards ceremony is due to take place in The National Stadium at Windsor Park on 24 September prior to Northern Ireland’s UEFA Nations League game against Kosovo.

Northern Ireland legend and McDonald’s Fun Football Ambassador Pat Jennings piled praise on the many volunteers who give up their time year-on-year to help deliver grassroots football across Northern Ireland.

He encouraged people to vote for their favourite volunteers in this year’s McDonald’s Irish FA Grassroots Football Awards.

"Without grassroots football volunteers none of this could happen," he said. “Through the years I have witnessed first-hand the significant impact that McDonald’s Fun Football has had, and continues to have, on the lives of young people in Northern Ireland.

"I think it is really important that these volunteers are recognised, and I look forward to meeting some of the nominees, finalists and winners at the awards later this year.”

For more information or to nominate your grassroots football hero visit http://www.irishfa.com/