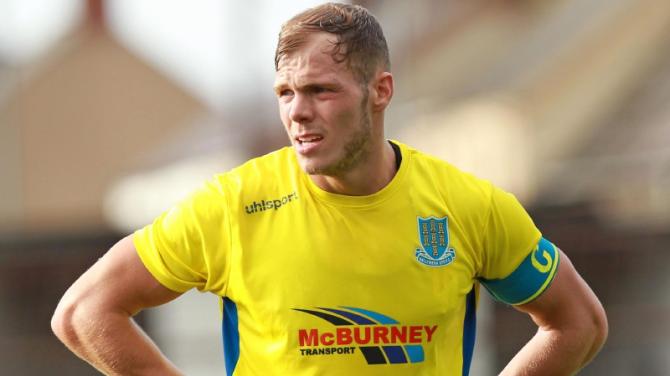 BALLYMENA United captain Leroy Millar will join Larne when his Showgrounds contract expires in the Summer.

The 26-year-old has played almost 250 games for the Sky Blues.

There has been speculation since January that the Cullybackey man would be moving to Inver Park.

On Instagram Millar, who worked as a shop assistant in JD Sports in the Fairhill Centre, said he would be forever grateful to have played for and captained his home town club.

And he said a “massive thank you” to all the supporters over the past eight years.

The skipper thanked the backroom staff and Board members and all the players he played alongside during his time at the club “for making my time at Ballymena special.”

The midfielder recalled proud moments of winning the League Cup, playing in Europe and leading out United in the recent Irish Cup final against Crusaders at Windsor Park.

Millar’s performance earned him the Man of the Match award.

He also helped the Braidmen progress in European competition for the first time in the club’s history in 2019, scoring in a 2-0 aggregate win over NSI Runavik of the Faroe Islands.

Millar thanked United manager David Jeffrey and his assistant Bryan McLoughlin for all they did for him.

Ballymena United announced Millar’s departure from the club on their website last night.

They said - Leroy Millar has agreed to join Larne at the expiry of his contract with Ballymena United.

The club will comment further at a time that's deemed appropriate.