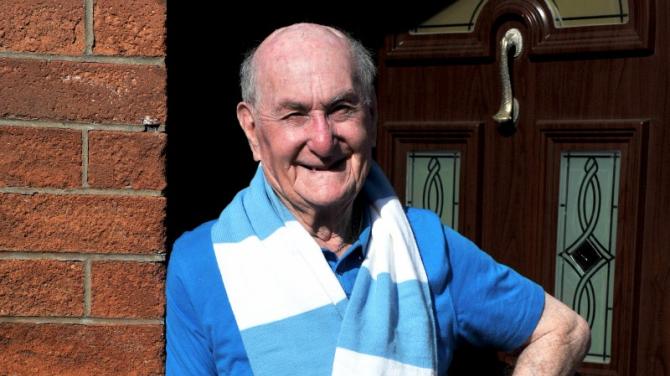 WILLIE-JOHN McLaughlin says winning the Irish Cup would be the best belated birthday present he ever received!

The sprightly 90-year-old celebrated this major milestone last Sunday and is now counting down the days to Saturday’s trip to Windsor Park where Ballymena United take on Crusaders in the showpiece showdown (2.30pm).

Willie-John, from Princes Street in the town, is a life-long Sky Blue supporter. He is a founder member of Paramount United Supporters Club.

“I saw my first match at Ballymena Showgrounds back in 1946,” he told Guardian Sport. “I was 14 years of age, and the game was against Distillery, and Ballymena United won 2-1.”

The nonagenarian says United will have to be at their best against Crusaders this weekend to bring the silverware back to Ballymena.

Willie-John attended last week’s Cup semi final at Mourneview Park, and watched United book their place in the final with a stunning winner from Steven McCullough.

His 53rd minute left footed free kick curled over the wall and in past Newry City ‘keeper Steven Maguire.

“At half time Dorothy Bonnes, who along with Rose, and several others provide tea and coffee and biscuits at the interval at United home games, kindly asked if I would like a Cup of tea, which I said yes to, and thoroughly enjoyed. It was a very nice gesture and I thank her.”

At the recent United home game with Carrick Rangers, which Ballymena won 3-0, Willie John was invited into the Boardroom for tea, and eats, and was presented with a Birthday card, and a United tie.

Ballymena United Chairman John Taggart welcomed him, and wished him many happy returns.

Willie-John thanked the club for the generous gesture.

Meanwhile, reflecting on his first ever United game Willie-John said it cost his father a shilling (five pence) and him sixpence (2 and a half pence) admission at the Ballymena venue.

“When football started after the War is was called the Regional League,” he told Guardian Sport. “If I can recall correctly there were 12 teams in it at that time.”

Willie-John, who was treated to a birthday meal and cake, by his friends at West Church’s Men United, is full of praise for Ballymena United manager David Jeffrey.

“He has did very well at Ballymena,” he said.

But he did point out that there were numerous games he thought they should have won!

“We really should have secured a top six place. There were games throughout the season we lost and really shouldn’t have,” he said.

And he took a verbal swipe at Glentoran for taking their exit from the Irish Cup eventually to arbitrition!

The Glens had beaten Newry City 1-0 in the quarter-final of the competition, but it was discovered they had played an ineligible player and they kicked out.

With the matter going to arbitration United were left waiting for weeks before discovering who and when they would be playing their semi.

“I can’t for the life of me understand why they (Glentoran) were protesting because rules are rules,” he fumed.