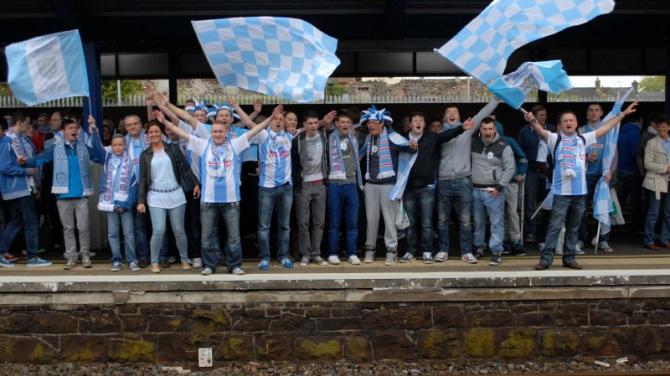 SKY Blue fans will have their full repertoire of terrace hymns at the ready for Saturday’s Irish Cup Final.

They’ll be singing about blue moons and sky blue ribbons in the merry month of May.

And hopefully, come the end of the game they’ll be composing another classic to record a famous victory.

Last week on our facebook page we asked for the full lyrics to one of the great - but virtually forgotten - United songs from yesteryear and we are grateful to reader Frances Henderson for coming up with all the verses - sung to the tune of ‘The Yellow Rose of Texas’.

It’s the Blues from Ballymena

That I am going to see

They may be playing poorly

But they’re good enough for me

You can talk about your cocks and hens and of Distillery

But the Blues from Ballymena are the only blues for me.

No matter how we do

Our pants they are a snowy white

Tradition is behind us

With me you will agree

That the Blues from Ballymena are the only Blues for me.

When we played the Belfast Linfield

In the final of the Cup

The scribes in all the papers said

This time your numbers up

But McGhee scored the first goal

And Eric Russell made it two

And the colours on the Cup that year

But when we meet the Windsor Blues

In the final of the Shield

They said there would be a blue moon

If you could beat Linfield

But when they scored the first goal

And we replied with two

The moon that night that gave her light

You have heard of blood donations

And how they cure the sick

I volunteered the other day, it cut me to the quick

For the nurse she plunged the needle in, and said it will no do

For the colour of the blood inside

It was Ballymena blue

I had a dream the other night

I hope it comes again

I dreamt I went to heaven

In a jet propelled plane

St Peter met me at the door

And said sure I know you

For the wings he wore upon his back