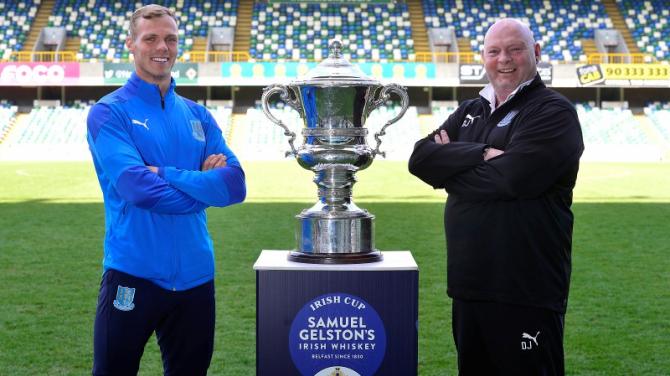 With all the off-field work complete it will then be up to the players to put in the shift of all shifts in the hope of brining the silverware back to the town.

At the weekend Jeffrey mixed and matched his squad in the closing Premiership game of the season away to Dungannon Swifts.

He wanted to offer players in the new-look starting side every opportunity to play their way into the Cup 18!

Ballymena beat Swifts thanks to two late goals - one from leading goal scorer Paul McElroy and the winner from Andy McGrory’s penalty.

The squad and officials will enjoy pre-match breakfast in Tullyglass House Hotel, before making the trip by luxury coach to Windsor Park in Belfast.

United have had little time to get ready for their biggest match of the season - thanks to Glentoran!

Ballymena beat Larne in the quarter-final back on March 3 - but had to wait until last week to see who they were meeting in the semi.

Glentoran were thrown out of the Cup for playing an ineligible player against Newry City but they took the matter to arbitration, - and they sent the East Belfast side packing!

It has been a frantic time at United - with players and officials all having to be measured up to be suited and booted!

And there is also the work of arranging the pre-match breakfast and transport and tickets!

United manager Jeffrey believes his side have been short-changed in the lead up to the final.

He said he is fully supportive of the principle of the right for any club to appeal - but was not happy at the length of time it took.

The way things worked out also saw Ballymena missing out on a big Saturday semi final, instead they had to play in midweek.

Meanwhile, Jeffrey, who completely rebuilt his team at the start of the season, recalled his last Irish Cup final during Covid in 2020!

United met, and lost, to Glentoran, who scored two quick goals just as Ballymena thought they were home and dry.

“That Cup final was absolutely weird, ... surreal. We were delighted that it was played as it gave some degree of normality,” he said. “But the fact that it was the way it was, with limited numbers, with all the very controlled sanitised ways, it was not a proper Irish cup final. But it was good that it took place. Hopefully this one will be different.”

On Thursday night United will facilitate the purchase of tickets at the Showgrounds for those having difficulty accessing them on-line.

But they stress there will only be a limited number available - and strongly advise supporters to seek the assistance of friends and family members to purchase on line.

The purchase of tickets on Thursday will be between 6.00pm and 7.30pm at the United shop in the Showgrounds.

The IFA are urging United fans to dress in United colours at the final - shirts and scarves and hats - to assist them produce a Sky Blue sea of colour!

Main United sponsor is Norman McBurney, of McBurney Transport, the chief backer at the club for the past 35 years.

Shirt sponsor in Saturday’s final will be Blair International.

Lifestyle Fitness are sleeve sponsor, while Tullyglass House Hotel are shorts sponsor, along with Curtis Cars.