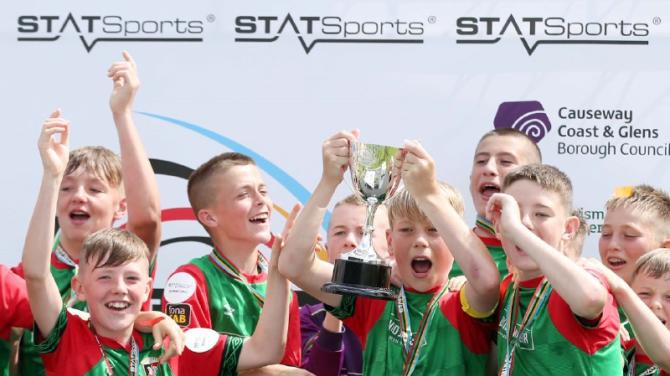 THIS year’s Minor section will see some of Northern Ireland’s best young talent face stern opposition from the Republic of Ireland, the United States of America and England.

The U13 age group was introduced in 2018 with all of the group matches taking place at the Ulster University in Coleraine. Greenisland FC took top spot in the inaugural 2018 event and one year later Glentoran took the honours defeating Dungannon United Youth in the final.

Chairman of the organising committee Victor Leonard said the tremendous success of the Minor competition in 2018 and 2019 left the committee with an easy decision to expand the Minor section.

“The Minor competition in 2018 was a huge success and the crowds at the University throughout the week were fantastic.

“We then made the decision to spread the Minor section out and about across the two council areas in 2019 and throughout the week the standard of football was very impressive and the feedback from the local teams and visiting teams was overwhelmingly positive.

“There was a great deal of interest at this age group for the 2022 tournament and we are delighted to have attracted 20 top quality teams from Northern Ireland and beyond.”

Thirteen teams from Northern Ireland are in the hat for the draw at the end of May and they include NIBFA U13 Cup finalists Linfield FC and Ballymena United.

Tournament regulars Greenisland FC are joined in the competition by their East Antrim neighbours Larne FC. There will be plenty of local interest with Coleraine FC and Ballymoney United confirming their entry.

Defending champions Glentoran will be hoping to secure their second SuperCupNI Crown later on this summer and the East Belfast side are joined by Cliftonville FC, who are making their debut in the competition.

County Armagh will be represented by three top youth sides with Portadown FC, Glenavon and Loughgall FC, who are also making their debut, all taking their place in this age group.

Dungannon United Youth were runners-up back in 2019 and the Tyrone side are joined by County Fermanagh’s Ballinamallard United, who have been strong supporters of the tournament.

Surf Soccer will be flying the flag for the United States in the Minor section, and they will also be making their bow at the competition and will be keen to make an impression.

Another side making their debut in the competition is Newcastle City Juniors FC. They are one of the leading youth teams in the Northeast of England and will be keen to test themselves against Clubs from other Countries.

The tournament has always been well supported by teams from the Republic of Ireland and two of Dublin’s top youth teams will have their eyes on taking top spot in July. Belvedere FC and Stella Maris are no strangers to the competition, with Belvedere finishing as runners-up in the Premier section back in 2004.

Dundalk Schoolboys’ League have been regulars at the competition for a number of years and they are joined by Finn Harps from Donegal. The Finn Park outfit got to the semi-finals back in 2019 and will want to go one step further this summer.

The 2022 event will take place from Sunday 24th July to Friday 29th July, with the traditional parade and opening ceremony at the Coleraine Showgrounds kicking off proceedings on the Sunday evening and the tournament will culminate with the final day of football action on Friday 29th July. The tournament will take place at seventeen venues across the three local Council areas of Causeway Coast and Glens, Mid and East Antrim and Antrim and Newtownabbey.